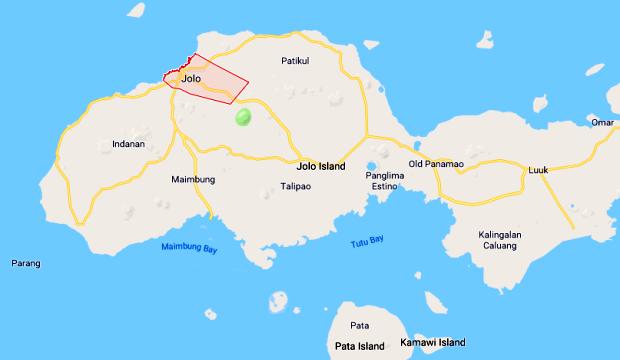 The released Indonesians are brough to the home of former Sulu Gov. Sakur Tan Sr. in Jolo (Image from Google Maps)

ZAMBOANGA CITY — Two Indonesians abducted near Taganak Island in Tawi-Tawi in November 2016 had been freed by their Abu Sayyaf captors in Sulu, the military said Sunday.

Tan told the Inquirer in a text message that the Indonesians were only brought to him but he did not know the circumstances surrounding their freedom.

Rear Adm. Rene Medina, commander of the Naval Forces in Western Mindanao, said the two Indonesians were boat captains of fishing vessels and they were kidnapped off Taganak Island on Nov. 5, 2016.

He said the two freed kidnap victims were immediately fetched by operatives from the Joint Task Force Sulu for medical examination and custodial debriefing.

The military had been trying to free the remaining kidnap victims in Sulu, according to Lt. Gen. Carlito Galvez Jr., the commander of the Western Mindanao Command.

Based on military records, nearly a dozen people – including foreigners – still remain in Abu Sayyaf captivity to date.

Galvez said the operation against the bandit group was continuing.

In September 2017, two Indonesians kidnapped by the Abu Sayyaf on Nov. 19, 2016 walked free after a clash between the military and the bandits in Sulu.

Saparudin bin Koni, 43, a boat skipper, and his deputy, Sawal bin Maryam, 36, were on a public utility vehicle when spotted by soldiers at a checkpoint in Barangay Bunot in Indanan, Sulu.

The sailors were among foreigners snatched by the Abu Sayyaf from the waters bordering the Philippines, Indonesia and Malaysia.

Last Jan. 9, the Philippines and Indonesia agreed to conduct joint security patrols at the Celebes Sea and to establish additional border stations to further boost security and to counter international terrorism and transnational crimes in Southeast Asian region.

Lt. Gen. Benjamin Madrigal, the commander of the Eastern Mindanao Command (Eastmincom) and his Indonesian counterpart, Rear Adm. Didik Setiyono of the Indonesian National Armed Forces, have also agreed to look into measures to improve the safe passage of citizens of both countries, including those fishing in international waters.

The signing of the agreement was held at the end of the two-day 36th Republic of the Philippines-Republic of Indonesia (RPRI) Border Committee Chairmen’s Conference held in Davao City.

The meeting was held nearly a week after President Rodrigo Duterte met with Indonesian Foreign Minister Retno Marsudi here, during which they also discussed defense cooperation in the porous borders at the Celebes Sea.

“As both our countries continue to face diverse security issues, our shared interest and commitment in addressing these concerns have not just deepened our alliance and collaborative engagement but also contributed in achieving a more peaceful and more stable Southeast Asian region,” Madrigal said.

According to Madrigal , various activities during the two-day event have enhanced the capabilities of the two military forces to respond to various security threats in the region, particularly that of terrorists.

Setiyono said Jakarta would be building more border crossing stations (BCS) to improve the security on its side of the border, although he did not give a figure as to how many Indonesian-controlled BCS currently exist.

For the Philippines, the military maintained three BCS off Mindanao – in Governor Generoso, Davao Oriental; and on Sarangani Island in Davao Occidental; and in the island-province of Tawi-Tawi, according to Maj. Ezra Balagtey, the Eastmincom spokesperson.

Speaking through an interpreter, Setiyono said they have also agreed to draw up mechanics on how to protect fishermen from both countries as they make their living in the high seas between Mindanao and the northern islands of Indonesia.

Both military officials stressed the joint committee had strengthened the relationship between the two countries and deepened their cooperation in matters of regional security.

Madrigal said such cooperation was seen to benefit the armed forces of the two countries in “making them ready and more capable to respond to security threats in the region.”

“Through coordinated patrols and intelligence-sharing (with the Philippine military) we hope to contribute in maintaining regional security in our side of the border,” the Indonesian naval officer said.

The joint committee also agreed on enlisting other military units as well as government agencies in their respective countries and to set up a definite hotline between their naval commanders “in order to immediately address developing situations and other challenges of the current times,” the two officials said.

Madrigal said maritime cooperation between Manila and Jakarta has been instrumental in stemming the flow of contraband and in interdicting suspected international terrorists who used the porous sea border between the southern Philippines and Indonesia.

He did not identify those suspected terrorists apprehended in the borders, though.

Philippine agencies such as the Department of Foreign Affairs (DFA), Bureau of Customs (BoC), Bureau of Fisheries and Aquatic Resources (BFAR), among others, would be tapped for the Border Committees.

Madrigal and Setiyono said they were also eyeing a review of the 1975 Border Patrol and Border Crossing Agreements and would seek to recommend amendments to its provisions to improve maritime security cooperation between the two countries. /atm