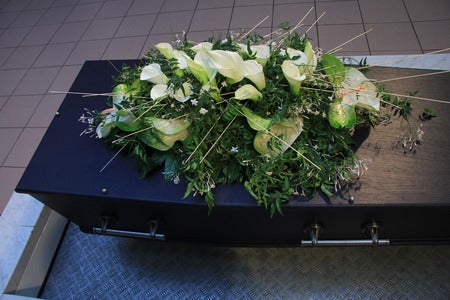 A 33-year-old woman from Mthayisi village near Mbizana, South Africa, who had been dead for 10 days, gave birth to a stillborn baby in her coffin.

When funeral parlor staff checked the body of Nomveliso Nomasonto Mdoyi the night before her funeral, they were stunned and left traumatized when they found her lifeless child with her.

“When we took the body from the mortuary tray to her coffin we discovered that there was a newly born baby between her legs,” the funeral parlor owner Fundile Makalana told local South African media Dispatch Live on Tuesday. “I have been in the business for more than 20 years and I have never heard of a dead woman giving birth.”

Makalana said Mdoyi’s body had bloated to twice its size, and had her made a special coffin because of the corpse’s condition.

Mdoyi’s mother, Mandzala, said that her daughter suddenly died after shortness of breath at home.

“First, I was devastated by the untimely [death] of my daughter and now I got the shock of my life to learn that she had given birth while she had been dead for 10 days. What is that? God please come and intervene?” Mandzala said.

East London doctor Patrick Hutchinson told the Dispatch Live that the baby’s birth was normal and was out of the ordinary. Other medical specialists said that a fetus in the mother’s womb can be expelled either due to bacteria or to the contracting and relaxing of muscles in death.

The woman and her baby were buried together, despite several calls from villagers to burn them both as it was suspected it was a case of witchcraft.  Katrina Hallare /ra