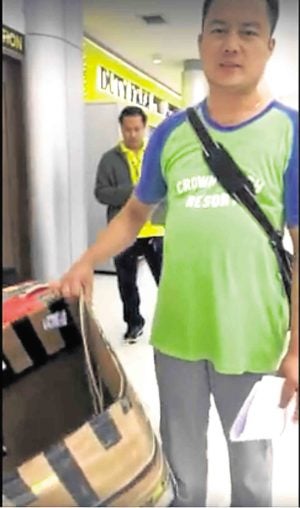 In a letter addressed to Miascor Groundhandling Corp. president Fidel Reyes, MIAA general manager Ed Monreal said the government will no longer renew its contract with the company.

“Please vacate and return all premises occupied by Miascor inside the airport complex and its terminals within 60 days from date,” Monreal said.

But there would be no disruption of services, the airport chief added, as there are other accredited ground-handling service providers that can be hired by airlines.

President Duterte had ordered the termination of the Miascor contract following the recent pilferage of passenger Jovenil dela Cruz’s luggage and “balikbayan” box at the Clark International Airport in Pampanga province.

“I would demand that there be justice instantly. Whoever is the service provider there, you terminate the contract and look for another one,” the President said on Thursday during a meeting with airport officials and the Dela Cruz couple.

Told by Alexander Cauguiran, acting president of Clark airport, that the six Miascor personnel who took the items had been charged and terminated, Mr. Duterte said:  “Patayin mo na lang (Just kill them).”

In a statement on Thursday, Miascor said it would “formally issue an appeal to the President to kindly reconsider his position on behalf of (its) almost 4,000 regular employees and their families who will be affected.”

Miascor added: “We would like to stress that we do not tolerate this type of behavior from any of our employees … (E)very employee is expected to demonstrate professionalism, honesty and integrity.”

The company apologized anew to Dela Cruz and said it had reached an amicable settlement with the overseas Filipino worker.

“The directive of the President is very clear. He wants to put these (pilferage incidents) to a stop,” Monreal said.

In 2016, the MIAA chief said, 18 out of 26 reported pilferage incidents involved Miascor employees. Monreal also recalled the August 2016 incident involving the wife of the Turkish ambassador who lost jewelry inside her baggage. Four Miascor employees were tagged in the theft.

Monreal said a surprise inspection of the Miascor office conducted Thursday night found what could be evidence of pilferage, including a pair of boots big and wide enough to conceal pilfered items. One boot had an attached padlock, while a pair of slippers was put together using another padlock.  The padlocks were the expensive kind usually used for travelers’ luggage.

Monreal said MIAA will also purchase 100 body cameras for its employees involved in handling baggage as well as other ground-handling service providers, including security agents.

Closed-circuit television cameras that can track the baggage as it passes from the plane to the conveyor belt and while the baggage is in holding or storage areas would also be installed.

All ground-handling crew would be subject to frisking as well, Monreal said. They are forbidden from wearing jewelry, he said, adding that there were incidents when ground handlers would suddenly sport watches or earrings, which later turned out to be stolen or lost.

Ground handlers would also be forbidden from using their mobile phones while on the job, he added.

Monreal said the MIAA has an ongoing investigation to find out if there was collusion between private and government employees at Ninoy Aquino International Airport in the pilferage of baggage.

In a press conference, Monreal said the contract with Miascor expired in March 2017 but had been renewed on a month-to-month basis.