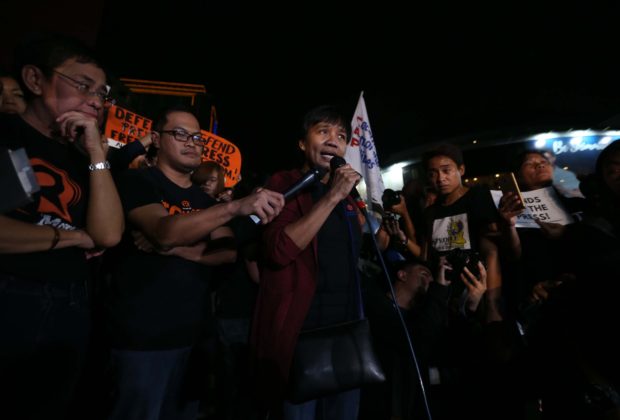 Journalists, members of campus publications, media workers, and bloggers donned black on Friday as they protested what they described as the government’s attack on press freedom.

Some 350 media workers and supporters massed around the Boy Scout rotunda at the corner of Morato and Timog Avenue in Quezon City in the Black Friday Protest for Freedom.

Freedom of expression and the public’s right to know are under siege, the group said, citing the recent Securities and Exchange Commission (SEC) decision to revoke the registration of the online news site Rappler last week.

“There has been a lot of effort to turn journalism into a crime,” Rappler chief executive officer Maria Ressa told the assembly led by the National Union of Journalists of the Philippines (NUJP) and the Let’s Organize for Democracy and Integrity Arts and Media Alliance (Lodi).

“But we are going to hold the line … and we will not be intimidated,” Ressa said of the SEC ruling to shut down the online news agency over allegations of foreign ownership.

Malou Mangahas, executive director of the Philippine Center for Investigative Journalism, cited similar restraints facing other media platforms, among them the pending renewal of the broadcast franchise of the Catholic Bishops’ Conference of the Philippines (CBCP) that would affect 54 radio stations under the Catholic Media Network.

Lawyer Mel Sta. Maria, who writes for Interaksyon 5 which is closing down end of March, said the attack on the media was similar to the stifling of the press under former President Ferdinand Marcos’ martial law regime.

“Now is a time for making choices amid battles between truth and lies, debate and dissonance, democracy and dictatorship,” said the group Bloggers for Freedom, whose signatories included Tonyo Cruz, Noemi Lardizabal-Dado, Carlos Celdran and Jover Laurio, known for her “Pinoy Ako Blog.”

The rally was yet another proof that freedom and democracy are alive and well in the Philippines, Malacañang said.

In a statement, presidential spokesperson Harry Roque said the government allows public displays of “constructive criticism” as part of people’s right to express their grievances.

In Zamboanga City, NUJP members offered Mass at the St. Joseph Church along with representatives from nongovernment organization Zabida and the Zamboanga City Press Club, as they asked the SEC to reconsider its decision on Rappler.

Melanie Guanzon, chair of NUJP-Zamboanga City Chapter, said the SEC did not exercise due process and failed to give Rappler sufficient opportunity to defend itself.

Monsignor Crisologo Manongas of the Archdiocese of Zamboanga, who officiated the Mass urged journalists to keep “reporting the truth.”  He added:  “Stay beside the truth, it’s difficult but is also liberating.”

In Bacolod City, at least 50 journalists, students, priests and members of the academe gathered in front of the Fountain of Justice at Araneta Street to oppose what they see as the administration’s crackdown on the media.

Dressed in black, the Negros participants held up lit candles, chanted and started a noise barrage while holding up streamers defending press freedom in the rally organized by the NUJP-Bacolod chapter and members of the Negros Press Club.

“The move of the government is clear harassment and intimidation to the media,” Marchel Espina, NUJP-Bacolod chair said in a statement. 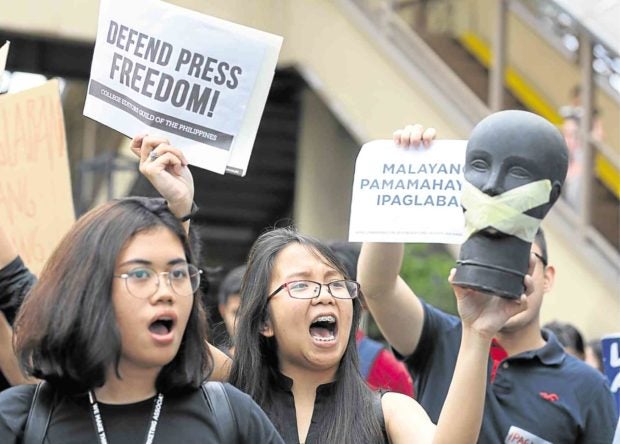 Philippine media “should have the courage not to compromise our freedom to tell the truth, despite pressure from those in power,” said Pasig Bishop Mylo Hubert Vergara during a forum on Friday titled “Catholic Media in Challenging Times.”

Vergara cited three challenges that Catholic media must face amid the rapidly changing landscape of social media. These are: the courage not to compromise the truth, collaborating with the secular media, and creativity in creating content for the public.

Despite these challenges, the CBCP official stressed that the “Church still must be faithful in propagating the truth.”

Manila Archbishop Cardinal Luis Antonio Tagle, who was the keynote speaker of the event, discussed the Church’s need for social communication as highlighted in the Vatican II council in the 1960s.

“There exists within human society, a right to information about affairs which affect people individually and collectively. The matter to be communicated should be true, and the manner of communication should be honorable and appropriate,” the prelate said.

For its part, the Commission on Human Rights issued a statement on Thursday calling for a media “free from any political or economic intervention.”

The statement added: “Media should be allowed to operate in a competitive environment and should be free to exercise liberties crucial in performance of their social mandate.” —JHESSET O. ENANO, LEILA B. SALAVERRIA, JULIE ALIPALA, CARLA P. GOMEZ, JULIE M. AURELIO AND JAYMEE T. GAMIL

Read Next
Brace for heavy traffic, QC motorists told
EDITORS' PICK
Miss Universe Philippines partners with JC
‘Reporter/commentator’ mauled for stealing fighting cocks
Duterte orders review of conduct of war on drugs
No evidence to warrant filing of homicide case vs Julian Ongpin – police
Who is Julian Ongpin?
Smart powers Liga Adarna Season 4: Race to the Top
MOST READ
Gordon: Senate uncovered ‘mother of all corruption’ under Duterte admin
LOOK: Angel Locsin inspires with weight loss progress
Isko Moreno reaches out to other presidential bets for unity
Who is Julian Ongpin?
Don't miss out on the latest news and information.