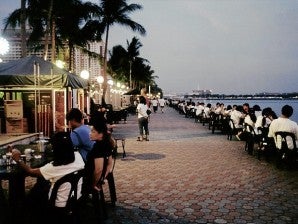 The Manila city government warned again of a crackdown against street vendors who continued to peddle their wares along the Manila Baywalk, Luneta Park, and other attractions along the city’s “tourist belt.”

In a statement, Manila Mayor Joseph Estrada has also ordered the Manila police to guard these areas as well as N. Reyes (formerly Morayta) Street, known as “hepa lane,” in Sampaloc to prevent vendors from coming back there.

Bambi Purisima, Manila public information officer, said the warning was prompted by reports that vendors often returned to the area despite possible violations of Presidential Decree No. 856, or the Code on Sanitation of the Philippines.

“While we wish to help (our vendors), we cannot allow them to sell there anymore as we would be violating the law,” the mayor said in a statement.

The prohibition was also part of Manila City’s continuous clearing operations to ensure that sidewalks and road sides were safe for motorists and pedestrians alike, Purisima said.

Vendors caught selling along these roads would be forcibly shut down and made to pay fines of P500 to P2,000, he added.

Estrada had previously allowed street vendors along the Baywalk and Luneta Park as prescribed by the Department of Social Welfare and Development (DSWD).

He later disallowed them anew after the DSWD plan to provide vendors with uniform food carts fell through.

Estrada promised, however, to help the vendors by finding a good spot for them to sell their wares.