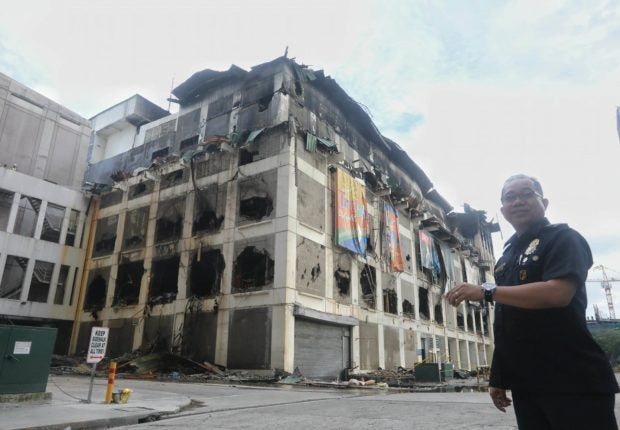 CEBU CITY—-Ayala Center Cebu will reopen on Jan. 18, just 12 days after it was forced to shut down its operation following the fire that gutted an adjacent department store.

But a handful of stores and stalls inside the mall would not be allowed to resume operations, said Cebu Holdings Inc., (CHI) which owns and operates Ayala Center Cebu.
These stores were located in the section of the mall that was connected to Metro department store, which was destroyed in a fire that ran for almost three days.
“There are parts of the main mall which connects to Metro that will be boarded up. So the stores and stalls near this area will not be able to open yet,” said lawyer Jeanette Japzon, CHI’s corporate communications manager.
The boarded-up areas include the one connecting the main mall’s ground floor (near Mercury Drug) to Metro as well as the area connecting the main mall’s second floor (near Orange Brutus) to the department store.
The area on the mall’s lower ground floor, which connects to Metro supermarket, will not be boarded up. But the Metro side will just be closed using its metal roll down doors.
The main mall has been closed since January 6 following the fire that razed the adjacent Metro department store the night before.
The fire lasted for more than 67 hours before the Bureau of Fire Protection in Central Visayas (BFP-7) declared a fire out following close to three days of unrelenting fire-battling by firefighters and volunteers.
“We have finished the clean up inside the mall and we are getting ready to welcome the community back into the mall,” Japzon said.
As of Jan. 17, she said they were in the process of removing the damaged portion of the Metro department store.
It was expected to be completed on the same day in preparation for the next day’s reopening.
The mall’s reopening came three days before the Sinulog Grand Parade, the culmination of the 10-day festivities to celebrate the feast of the Holy Child Jesus.
Thousands of tourists and Cebuanos living abroad flock to Cebu to witness the Sinulog festivities, one of the country’s biggest festivals.
Like many malls in the city, Ayala too had its activities laid out in preparation for the Sinulog.
But it was derailed by the fire.
Now that it would reopen on Thursday, the mall intended to go through with its Sinulog-related activities dubbed “Fiesta sa Ayala.”
Mall goers can then check the Sto. Niño exhibit at The Gallery area which will run from Jan. 19 to 23 and a Kapuso Fiesta activity at The Terraces on Friday afternoon.
On Jan. 21, the mall will also host “Surtidos,” the 25th Anniversary Show of the Sinanduloy Cultural Troupe from Tangub City, which enjoys the distinction of having the most number of championships under its belt in the history of Sinulog Grand Parade.
Sinanduloy has won 12 times in the Sinulog-based category, the latest being in 2017.
But this year, Sinanduloy would not be joining the Sinulog Grand Parade because it would be busy with its anniversary shows.
“Sinulog dancers and drum beaters will also be going around to spread the festival atmosphere in the mall,” Japzon added.
Their grand Sinulog fireworks display dubbed “Sinulog Festival of Lights” will also push through at 9 p.m. on Jan. 21.
But the Balik Cebu welcome dinner for balikbayans, which used to be held at The Terraces, had been transferred to the nearby City Sports Club./lb
ADVERTISEMENT
FEATURED STORIES
NEWSINFO
Monsoon rains to continue in majority of PH on Monday — Pagasa
NEWSINFO
Ramos rejected power grab twice – Almonte
NEWSINFO
First Lady Liza Araneta-Marcos meets with Chinese top envoy in Malacañang