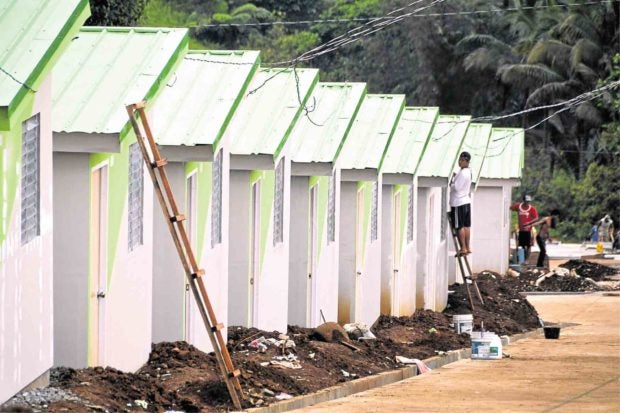 Workers rush to finish temporary shelters in the village of Sagonsongan in Marawi City that the government has promised to residents displaced by war. —DIVINA SUSON

MARAWI CITY — Twenty days after the government turned over the keys to their new houses, residents of this city displaced by the military’s five-month battle with terrorists have yet to move in to temporary shelters built for them.

Housing Assistant Secretary Felix Castro said the government had reset for the third time the moving-in dates for 250 families who would occupy the shelters because these were not yet ready for occupancy.

Task Force Bangon Marawi (TFBM), the body tasked with the rehabilitation of the city and the resettlement of displaced residents, turned over on Dec. 27, 2017, the keys and certificates of occupancy to 250 families, or half of the 500 families initially targeted to be given temporary shelters.

Castro said the transition houses, made of panel boards, still lacked electrical connections. He also said the road network and drainage system on the 13-hectare relocation site had yet to be finished.

Earlier, Castro projected the units to be ready by December last year but he revised his estimate to Jan. 20 this year. He said the prevailing weather condition, and the need for “minor fixes,” such as plumbing, power lines and other finishing jobs, had caused the delay.

Alykhan Ali, officer in charge of the Department of Public Works and Highways in Lanao del Norte province, said the road network leading to the site was almost complete.

He said the delay in the arrival of materials from Korea and the lack of heavy equipment by the contractor had also delayed the completion of some of the housing units.

Aside from Sagonsongan, other transitory areas for residents included one in Matungao in Lanao del Norte.

Farmida Macabando, president of the Association of Barangay Councils in Marawi City, said the technical working group created to screen and verify beneficiaries decided that 70 percent of the more than 1,175 temporary shelters being built on a 13-hectare land in Sagonsongan would be awarded to evacuees living in evacuation centers.

The remaining 30 percent would be allotted to home-based evacuees — or those living on private lots and houses of relatives.

Aside from ensuring that the temporary shelters were ready for occupancy, the TFBM was also tasked to ensure the safety of residents and to see to it that the rehabilitation efforts were on track, presidential spokesperson Harry Roque said last week.