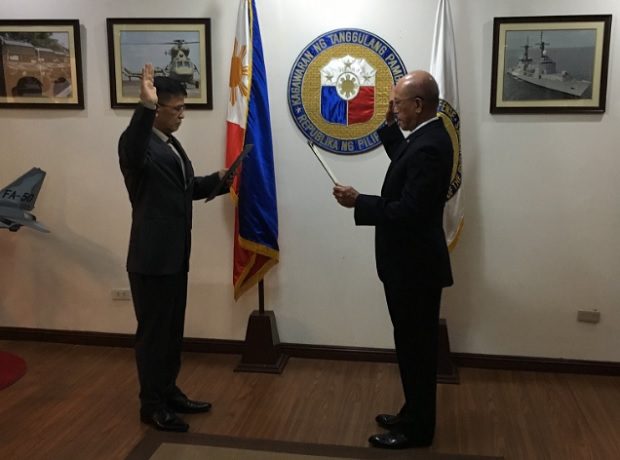 Former Customs chief Nicanor Faeldon took his oath as deputy administrator of the Office of Civil Defense (OCD) on Tuesday.

Photos posted on Twitter by his legal team @FaeldonLegal showed the new deputy administrator taking oath before Defense Secretary and National Disaster Risk Reduction and Management Council chairman Delfin Lorenzana. He also posed for a photo with other DND and NDRRMC officials.

In a statement by the Office of Civil Defense, Lorenzana urged Faeldon “to bring new insights that would contribute to OCD’s development as the country’s lead Disaster Risk Reduction and Management agency.”

Faeldon is currently detained at the Senate after he refused to attend the hearings on the smuggling of P6.4 B worth of shabu from China. He earlier quit as Customs chief after being tagged in the scandal.

He was also recently temporarily released from Senate detention to join his wife who just gave birth. /cbb

Read Next
Domestic flights cancelled due to bad weather – MIAA
EDITORS' PICK
Gov’t plans to open COVID-19 vaccination for 5- to 11-yr-olds by January 2022
Omicron variant detected in more countries as scientists race to find answers
Smart, Cleanfuel ink tie-up program to deliver affordable connectivity solutions
Gov’t eyeing COVID-19 vaccine booster for essential workers, indigents by Dec. 10
Keep ransomware at bay with these security and backup strategies
A delightful blessing!
MOST READ
Quiboloy warns of ‘much worse than Omicron virus’ if his ‘persecution’ is not stopped
MMDA: Number coding during afternoon rush hours back this week
Roque joins ticket of Marcos-Duterte
Marcoleta defends pol ads on ABS-CBN
Don't miss out on the latest news and information.