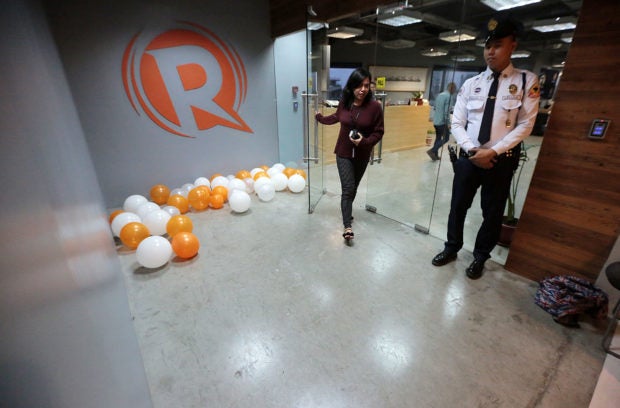 A rappler employee exits its office at the Capitol Commons in Pasig on Monday, January 15, 2018 after Maria Reesa and Chay Hofilena gave a press briefing to media as the Securities and Exchange Commission (SEC) orders the revocation of its license to operate.
INQUIRER PHOTO / GRIG C. MONTEGRANDE

Militant lawmakers on Monday denounced the decision of the Securities and Exchange Commission (SEC) to revoke the registration of online news outfit Rappler, which they described as “critical” of President Rodrigo Duterte.

“SEC’s decision revoking Rappler’s registration is an authoritarian measure and an attack against press freedom,” Anakpawis Rep. Ariel “Ka Ayik” Casilao said in a statement. “This is a confirmation that the Duterte government is intolerant of a critical institution, especially from the media sector.”

“It is a stern warning that media outfits should abandon independence and act as flunkey of the government or face repression,” he added. “Anakpawis stands with Rappler on this issue and we also call on the public to defend press freedom.”

Gabriela Women’s Party (GWP) Rep. Emmi de Jesus likewise condemned the SEC ruling, saying: “[It] constitutes one of the gravest attacks to press freedom in the post-1986 EDSA uprising period and projects a chilling reminder of the media crackdown under the Marcos dictatorship.”

“We are alarmed that the SEC has chosen to nitpick on Rappler’s alleged violation of the constitutional provision on foreign equity restrictions in order to shut down an entire media outfit, which has been openly criticized by President Duterte on several occasions,” De Jesus said in a statement. “Such a move carries with it the political message that this regime can gag reportage that runs counter to its wishes, a hallmark of dictatorial rule.”

She pointed out that it was “quite an ironic light, the SEC invoked the foreign equity restrictions of the 1987 Constitution at a time when President Duterte and his allies are on high gear in pushing for Charter change (Cha-cha), which include extending term limits and lifting limits on foreign ownership of land, public utilities and of the media.”

“We stand with journalists on this dark day as we continue to call on the women and people to frustrate Duterte’s ploy to install a dictatorship,” she added.

In a decision released Monday, the SEC claimed that Rappler “violated the constitutional and statutory Foreign Equity Restrictions in Mass Media” for being owned by foreign firm Omidyar Network.

But Rappler vehemently denied this, saying: “Philippine Depositary Receipts (PDRs) do not indicate ownership. This means our foreign investors, Omidyar Network and North Base Media, do not own Rappler.”

“They invest, but they don’t own. Rappler remains 100-percent Filipino-owned,” it added.

During his State of the Nation Address last year, Duterte threatened to have Rappler’s ownership investigated. /atm

READ: Rappler vows to continue bringing news: ‘We will hold the line’