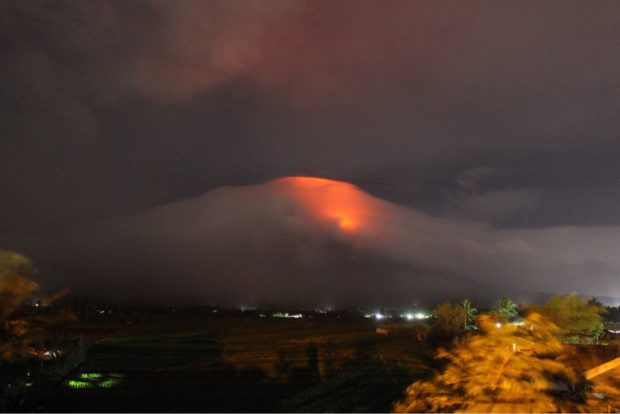 The crater glow of Mount Mayon is clearly visible on Sunday evening, Jan. 14, 2018, indicating that magma is near the surface, according to Phivolcs. Alert level 3 has been raised over the volcano. (Photo by EARL EPSON LIM RECAMUNDA / Contributor)

GUINOBATAN, Albay — The Philippine Institute of Volcanology and Seismology (Phivolcs) raised Mayon Volcano’s alert status to Alert Level 3 – which means it has an increased tendency towards eruption – at 8 p.m. Sunday, less than 24 hours after Alert Level 2 (increasing unrest) was raised here.

Ed Laguerta, Phivolcs Bicol chief, said that they were still unable to determine the distance of the lava flow because of the clouds. But the brighter crater glow is an indication of lava.

“The brighter glow of the crater is an indication of the initiation of lava flow on the southern slope of the volcano,” Laguerta told Inquirer. “We cannot determine the distance yet because of the thick clouds.”

Laguerta said that because of the raising of the alert status, the danger zone is now extended to the 7-kilometer radius of the volcano.

In Camalig, Rommel Negrete, Municipal Disaster Risk Reduction and Management officer, said that as of press time, they were undergoing evacuation of residents in Barangay Quirangay and parts of Barangay Sua.

“There are already108 families from Quirangay, but it is expected to rise to 200,” Negrete said.

He said that the evacuees would brought to Camalig North Central School where they would stay until the alert status is lowered. Local government trucks were used to evacuate the residents. 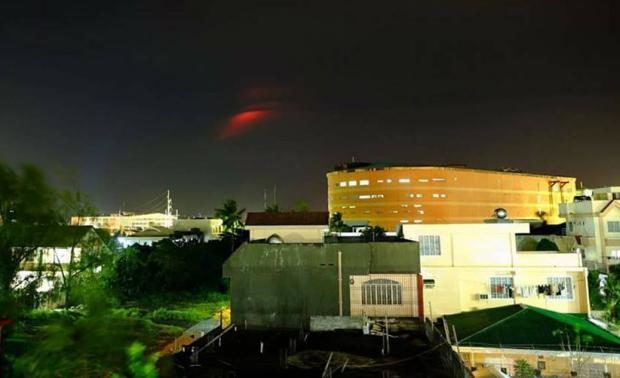 The crater glow of Mount Mayon as of Sunday night, Jan. 14, 2018. (Photo courtesy of the Office of Civil Defense in Bicol)

Negrete also said that they had run out of face masks by Sunday afternoon. Residents were advised to use clean, damp cloths as alternatives to avoid the negative effects of ash fall events.

In Tabaco, Hugo Buen, the city’s DRRM officer, said that they were also evacuating residents in Barangays Comon, Nagsipit, Magapo, Buhian, Oson, and Buang. The residents would be brought to the nearest schools for shelter.

In Guinobatan, Egmidio Pavericio, Jr. said that there were only few residents within the 7-kilometer radius, but they were still undergoing evacuation in Barangay Muladbucad Grande.

As of 4:21 p.m. of Saturday, Phivolcs was able to record 158 rockfall events in affected areas. It was also able to record three phreatic eruptions since Saturday. /atm