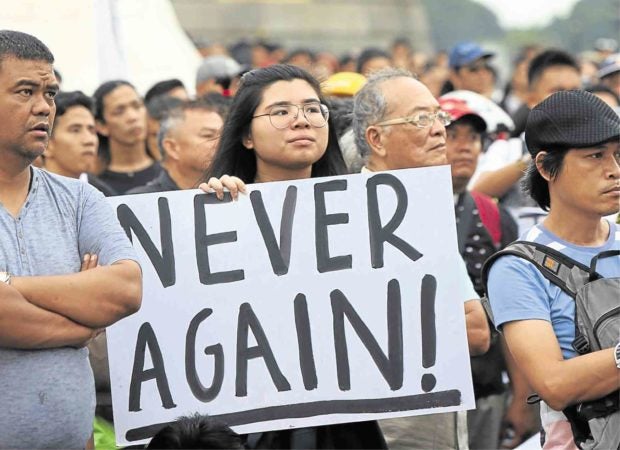 A protester show a sign that signifies her opposition to the extension of martial law in Mindanao during a protest action in Manila. INQUIRER file photo / LYN RILLON

All four petitions against the year-long extension of martial law in Mindanao that were filed before the Supreme Court (SC) have been consolidated, according to the SC Public Information Office (PIO).

In an advisory Friday evening, the SC PIO said all four petitions would be discussed during the oral arguments at the SC’s en banc session hall on January 16, at 2 p.m. and January 17, at 10 a.m.

The fourth petition was filed by a group led by former Commission on Elections (Comelec) chairman and one of the framers of the 1987 Constitution Christian Monsod.

The year-long extension of martial law in Mindanao, which was approved by Congress in a joint 240-27 vote last December, had lacked sufficient factual basis as Marawi City was already liberated and key leaders of the rebellion were reported dead, according to the petitioners.

READ: SC to include Etta’s plea vs martial extension at oral arguments

This argument was also raised in the first three petitions filed with the SC, where it was stressed that the government had already declared the termination of fighting in Marawi.

The government, through the Office of the Solicitor General, is expected to submit its comment on the consolidated petitions not later than 5 p.m. on Saturday, January 13.

In a text message to INQUIRER.net at around 3 p.m. on Saturday, OSG spokesman Atty. Erik Dy said they have yet to file their comment. /jpv