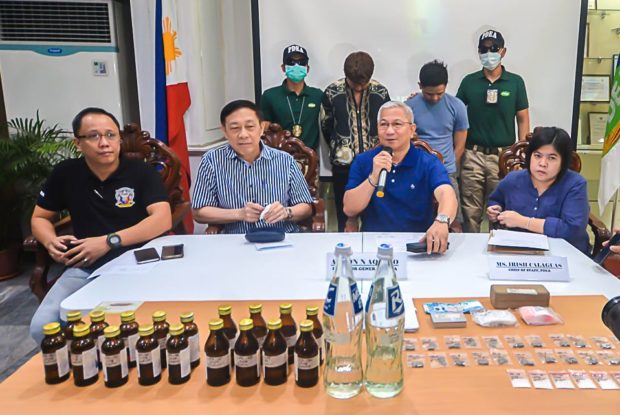 PDEA Director General Aaron Aquino said that this mix of illegal drugs could now be proliferating somewhere and could be a new trend in illegal drug trafficking schemes of syndicates.

Aquino said they discovered that liquid ecstasy and cocaine were being blended with energy drinks following a buy-bust operation at Princeville Condominium in Mandaluyong City on Thursday night.

During the operation, liquid ecstasy placed inside 20 energy drink bottles and 1.6 liters of liquid ecstasy with an estimated street value of P480,000 were confiscated by PDEA Special Enforcement Service (PDEA-SES) agents, Aquino said.

The PDEA chief said 70 pieces of ecstasy tablet worth P46,000 and six packs of cocaine worth P140,000 were also seized during the operation.

He added that two suspects were arrested in the operation and were identified as Lester Almalbez, 35, a resident of the condominium and a suspected ecstasy and cocaine retailer; and Herald Peñaflor, 26, an alleged drug supplier.

“We cannot discount the possibility that a new variety of ecstasy which is blended with cocaine is doing the rounds in bars and clubs. You could imagine its potency compared to the other mainstream drugs,” Aquino said.

“PDEA is presently intensifying its intelligence gathering to arrest unscrupulous elements responsible for this new trend in illegal drug trafficking,” he added.

Aquino said charges for sale and possession of dangerous drugs in violation of Republic Act 9165 or the Comprehensive Dangerous Drugs Act of 2002 would be filed against Almalbez and Peñaflor in court. /jpv