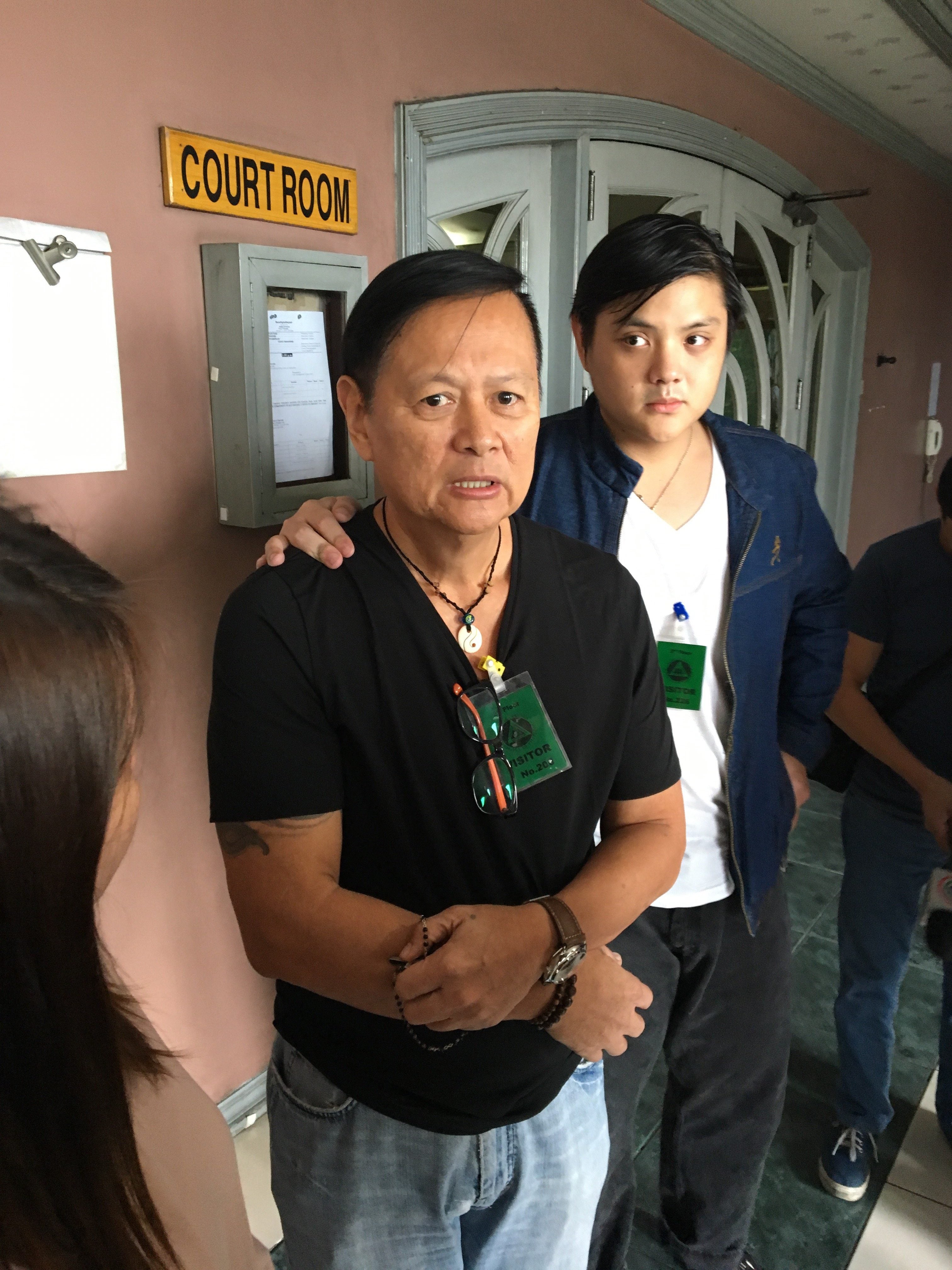 Former Palawan Governor Joel Reyes, joined by his son, clutches his rosary as he attends the Sandiganbayan’s hearing on the Ombudsman’s motion to have him rearrested for being a flight risk. Photo: Vince F. Nonato.

This was former Palawan Governor Joel Reyes’s guarantee, following the Ombudsman’s filing of a motion seeking to order his rearrest and cancel his bail out of fear that he would again escape like he did in 2012.

Reyes’s remark came after the Sandiganbayan on Thursday declined to immediately rule on the prosecution’s urgent motion to send Reyes back to jail pending the resolution of his appeal on his Aug. 29 graft conviction.

Despite the prosecution’s plea for an immediate ruling, the court’s Third Division gave Reyes’ lawyers until Monday to answer the motion.

“The Court understands your concern given past events that he fled. But, at the same time, the accused is entitled to be heard,” Presiding Justice Amparo M. Cabotaje-Tang said in a Thursday hearing.

Instead, Tang made Reyes’s lawyer Demetrio Custodio promise to the court that he would not flee the country while the issue is resolved.

“As an officer of the Court, can you guarantee that Mr. Reyes will not flee until the Court has resolved all pending incidents?” the magistrate asked, to which Custodio replied, “Yes, Your Honor.”

Reyes, clad in a form-fitting black V-neck shirt and faded jeans and donning rosaries on his hands, was joined by his son when he attended the hearing.

At the sidelines of the hearing, he told reporters that he was “sad” about the Ombudsman’s moves “because I had just come out of jail,” following the Court of Appeals’ Jan. 5 decision to set aside the Puerto Princesa Regional Trial Court’s finding of probable cause in the case of the January 2011 murder of broadcaster Gerry Ortega.

The Ombudsman had cited the need to “prevent [the] recurrence” of Reyes’s escape in March 2012 to Thailand with his brother, former Coron Mayor Mario Reyes, following their indictment for the Ortega murder. Thai authorities arrested them in Phuket for violation of immigration laws in September 2015.

Asked how Reyes could assure that he would not repeat his escape, he blamed the “heat of the situation” before, when he supposedly faced death threats because of “politics.”

“It’s politics. Had I been here at the time, you would not be talking with me now,” he said. “There were plenty of threats to me at the time, so I found it prudent to take time before appearing and facing my cases. But, I faced them.”

Reyes also expressed thanks for the Third Division’s move to give him time to answer the motion first before resolving the issue.

It may be recalled the Third Division on Aug. 29 already meted out a prison term of six to eight years on Reyes over the anomalous renewal of the mining permit of a company that exceeded ore extraction limits.

However, over the Ombudsman’s objections, the court still allowed Reyes to post a P60,000 bail—double the bond required when the trial was still pending—while it resolved his appeal.

At the time of his graft conviction, his nonbailable murder case was still pending. Since he was still detained in Puerto Princesa City at the time, the Sandiganbayan said there was no reason to deny him bail.

Following Reyes’s release from detention due to the CA’s Jan. 5 decision, the Ombudsman said the Sandiganbayan should reconsider its grant of bail because “circumstances… have changed.”

The graft conviction arose from the renewal of Olympic Mines and Development Corp.’s small-scale mining permit for the period of Apr. 6, 2006 to Apr. 5, 2008.

Prosecutors questioned the renewal because OMDC already exceeded the annual maximum extraction limit of 50,000 dry metric tons (DMT) of ore, and because it used heavy equipment in its operations in violation of small-scale mining laws.

Notably, OMDC’s permit was renewed seven months ahead of its Nov. 3, 2006 expiration, because the mining firm had exhausted its limit too early.

Reyes also faces 36 counts of graft pending at the Sandiganbayan Second Division in connection with anomalies attending 209 contracts funded by P1.53-billion in royalties from the Malampaya gas field in 2008 and 2009.

Ortega’s killing was attributed by local media to his exposé of the allegedly irregular use of Malampaya funds that had now led to the pending charges. /je

Read Next
Inflation may rise as high as 4% due to TRAIN, says Lacson
EDITORS' PICK
Metro Manila posts lowest temperature yet this ‘amihan’ season at 19°C
DOH: 28,471 new COVID-19 cases in PH; active cases now 284,458
Gear up and get ready to play with Yamaha Mio Gear
Acer starts the year off strong with the Aspire Vero National Geographic Edition
On Day 2 of implementation, gov’t says workers now exempt from ‘no vax, no ride’ policy
Over 3 Million worth of prizes to be won at Smart Padala’s SENDali Manalo Promo!
MOST READ
Cold-case investigation names surprise suspect in Anne Frank’s betrayal
Emma Stone calls Andrew Garfield a ‘jerk’ after he ‘lied’ about his ‘Spider-Man: No Way Home’ appearance
Derek Ramsay on being married to Ellen Adarna: ‘Gumaan ‘yung mundo ko’
Czech anti-vax singer dies after deliberate infection
Don't miss out on the latest news and information.