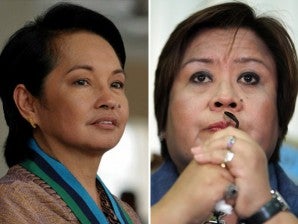 Having locked horns with Malacañang yet again, the Supreme Court holds a special full-court session Friday to deliberate on various petitions concerning the question of whether former President and now Pampanga Representative Gloria Macapagal-Arroyo should be allowed to leave the country.

But the temporary restraining order (TRO) issued by the high court could become moot.

Philippine Daily Inquirer sources said the Commission on Elections (Comelec) might file a case of electoral fraud against Arroyo Friday.

In an informal press conference at the lobby of St. Luke’s Medical Center in Taguig City, Arroyo spokesperson Elena Bautista-Horn also said they had  “received information” on the supposed plan of the joint panel of the Department of Justice (DOJ) and the Comelec to file a resolution of probable cause for electoral sabotage in connection with the alleged fraud in the 2007 elections.

The latest petition, filed Thursday, is from Arroyo herself, who is now asking the Supreme Court to stop Justice Secretary Leila de Lima from further blocking her foreign travel. Only on Tuesday, the high court issued a TRO on the inclusion of Arroyo and her husband in the immigration watch list.

Court observers said the special session could also be a showdown between the appointees of Arroyo and of President Benigno Aquino III to the high court. In issuing the TRO favoring Arroyo, the justices voted 8-5, with three of the President’s appointees opposing the majority decision.

Jose Midas Marquez, the high court’s administrator and spokesperson, on Thursday told reporters that the 15-member chamber would also discuss the petition filed by De Lima seeking the lifting of the TRO, which allowed Arroyo to leave for purported medical treatment abroad.

But Marquez said the decision of Chief Justice Renato Corona to call for a special en banc session was not peculiar to Arroyo’s case. “This has been done numerous times before,” he said.

The justices are also to deliberate on the request of Arroyo’s lawyer, Estelito Mendoza, to move the November 22 schedule for oral arguments on Arroyo’s case to an earlier date, and De Lima’s supposed defiance of the high court’s TRO, Marquez said.

“The court is just monitoring what is happening and the pleadings that have been filed. The court is concerned, of course, about the compliance with its order,” Marquez said. “The court will address all these pending matters.”

De Lima said the DOJ would closely monitor the court proceedings and would oppose Mendoza’s request to reset the date of the oral arguments.

“We find that objectionable because we’re already pressed for time in filing our comment to the TRO. We practically have less than three days to comply with the order of the court,” she said. “The justices will not have reasonable time to go over our comment if the oral arguments will be held earlier.”

De Lima said while the government was hoping for a favorable decision on its motion for reconsideration, “we’re preparing for the worst-case scenario, which is a denial.”

“We’re still planning in the event that that will happen. We still have other options, but we can’t decide on it yet,” she said.

De Lima foiled the former First Couple’s attempt to fly out on Tuesday night, saying the watch-list order was still in effect because the justice department had yet to receive a copy of the TRO. She subsequently said they would continue to be barred from leaving until the high court had ruled on the government’s appeal.

Through her lawyer Mendoza, Arroyo on Thursday asked the high court in a 13-page urgent motion to direct De Lima and Immigration Commissioner Ricardo David Jr. to immediately implement the TRO.

Arroyo said De Lima’s actions in barring her from leaving the country were a “disregard” of the separation of powers of the three branches of the government.

“Under the circumstances, [Arroyo] is without any plain, speedy and adequate remedy but to ask the Court … to direct [the] respondents to cease and desist from preventing [her] … from leaving the country for her scheduled medical treatment abroad,” the petition said.

It said De Lima’s opposition to Arroyo’s travel “openly defied” the high court’s decision to lift the travel ban “in blatant disobedience of and resistance to a lawful order” of the tribunal.

The petition added: “In preventing [Arroyo] from leaving the country despite the TRO … the respondents are disregarding the core value of separation of powers among the coequal branches of the government and the principle of checks and balances which guarantee our basic freedoms.”

According to Mendoza, the “sad spectacle” of De Lima’s purported act of defiance showed how “the highest court of the land” was “being flouted and disregarded.”

“[W]ithout action for such an odious breach, then not only this high tribunal but the law itself stands in disrepute,” he said.

He also said moving Arroyo’s scheduled medical checkups to a later date would result in “irreparable harm and injury” to her.

De Lima is not exactly waging a lonely battle.

Speaking with reporters at the Senate, she said Mr. Aquino was aware of her actions, including her decision to prevent Arroyo from leaving despite the high court’s TRO.

Asked if her actions had the go-signal of the President, she said in Filipino: “Of course, the things that I do I inform him, because I am his alter ego, especially in important cases like this.”

“His instruction is always to do whatever is appropriate.”

De Lima downplayed the possibility of a constitutional crisis resulting from her decision to go against the TRO.

“We do not want that to happen. We are not aiming for that to happen. It’s just that we are also asserting the right of the state,” she said, citing the dissenting opinion of one justice of the high court, who argued that the government position should be first heard in oral arguments before a TRO could be issued.

De Lima said her action against the high court’s order would not necessarily set “a dangerous precedent” and prompt other parties to defy a court order.

“I always believe that each case is different, has its own unique set of facts and circumstance, has its own context,” she said. “What may be ordinarily applied to ordinary cases may not be considered applicable in cases like this because it has its own context. That’s what [the people] need to understand.”

De Lima did not appear disturbed by the contempt charge filed against her by Arroyo’s camp Thursday.

“I will face that charge. I will respond to that at the proper time. I’m sure the Supreme Court would also accord me due process. I would be asked to respond. That’s the usual process. I think they will ask me to show cause why I should not be cited for contempt. I’m prepared to answer that in due time,” she said.

The justice secretary also said she was not afraid to face the powerful Commission on Appointments (CA) for her confirmation hearing. Her actions against the TRO has triggered vehement reactions from Senators Joker Arroyo, Miriam Defensor-Santiago and Francis Escudero, as well as Majority Leader Vicente Sotto III.

“I’m hoping that they will treat me fairly during the proceeding, that everything will be done with utmost professionalism.” With a report from Erwin Aguilon, Radyo Inquirer 990AM