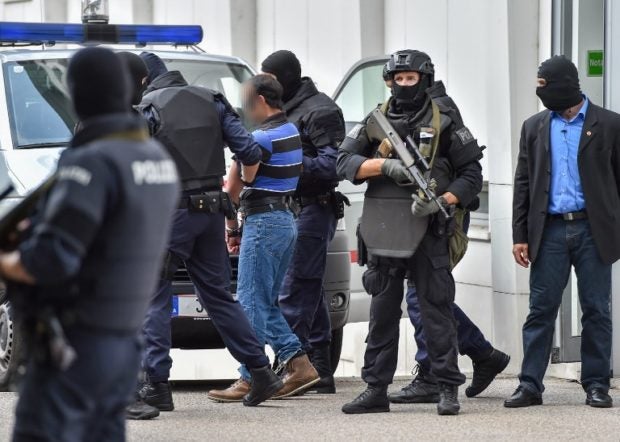 A suspected member of the Islamic State (ISIS) jihadist group is led away by Austrian police from the court in Linz, Austria, on July 27, 2016. Austria has rejected accepting a suspected ISIS fighter that needs emergency surgery citing security risks. AFP FILE

Temirlan M, 19, is in a coma after being shot in the head during a special forces operation in northern Georgia on December 26, the Kronen Zeitung newspaper reported.

He is believed to be linked to Chechen warlord Akhmed Chatayev, who is suspected of organising a 2016 attack at Istanbul’s airport.

Georgian authorities asked that the man receive emergency surgery in a Viennese hospital but a spokesman for Austria’s interior ministry said the government had vetoed his entrance to the country.

The arrival of Temirlan M would pose a “major risk to domestic security,” the spokesman said, adding that possible rescue or blackmail attempts could be made if the man entered the country.

A country of 8.7 million people with a large Chechen community, Austria has one of Europe’s highest numbers of foreign jihadists per capita.

Chatayev was killed during a counter-terror operation in Georgia’s capital Tbilisi in November.

He had been identified by Turkish media as the organizer of a triple suicide bombing at Istanbul’s main airport in June 2016 in which 46 people were killed and more than 200 wounded.

Austria’s new government, a coalition between the conservative People’s Party (OeVP) and the far-right FPOe entered office in mid-December, pledging to stop illegal immigration and to make national security a priority.