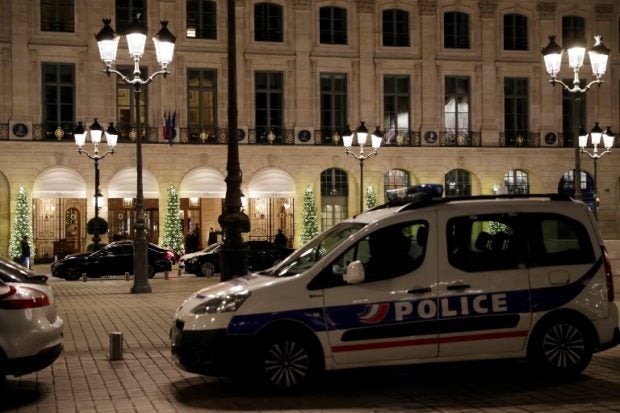 The photo shows a police car parked outside the Ritz luxury hotel in Paris on January 10, 2018, after an armed robbery. Robbers made off with millions of euros worth of jewellery after smashing the windows of the world-famous Ritz, police said, adding that three suspects had been detained. AFP

PARIS, France — A gang of five armed robbers launched a spectacular raid on the world famous Ritz hotel in Paris Wednesday, making off with an estimated four million euros worth of jewels, investigators said.

Three of the gang were detained at the scene but two remained at large as of Thursday evening, a police source said.

A judicial source put the value of the jewels seized at “more than four million euros” ($4.75 million).

The five men armed with hatchets arrived at the hotel in Paris’ luxurious Place Vendome around 6:30 pm (1730 GMT) before smashing the windows on the ground floor and making off with the jewels.

“World-famous jewellers display their jewellery at the Ritz,” a police source said.

Three of the gang were detained while fleeing the scene and an AFP journalist said some roads around the hotel were sealed off by security forces following the incident.

“We heard a loud noise and lots of racket in the street,” one hotel employee told AFP. “Passers-by took refuge in the hotel. We didn’t know what was going on until someone told us there had been a robbery.”

Another employee said he saw a motorbike speed along a road at the back of the hotel after the break-in.

Place Vendome, with its opulent window displays, has been the scene of several audacious daytime raids.

In March 2016, two robbers stole an estimated six million euros worth of jewels from luxury fashion brand Chopard after threatening employees with a gun and grenade. Three men were charged in connection with that heist.

The French capital’s most high-profile recent jewellery theft was carried out in October 2016 against US reality television star Kim Kardashian.

Five men, some wearing jackets with police insignia, held Kardashian at gunpoint, making off with several pieces of gold and diamond jewellery as well as a ring — a total estimated worth of nine million euros.

One of the robbers, fleeing the scene on a bicycle, dropped a diamond-encrusted cross worth 30,000 euros, which was found by a passer-by a few hours later.

It remains the only piece to be recovered from the heist. /cbb