Drilon: No separate vote, no con-ass 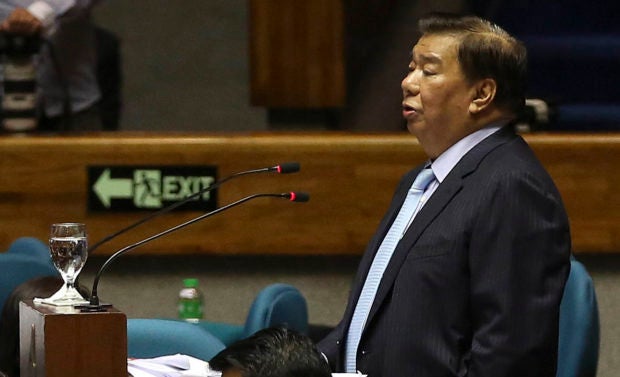 No senator will agree to joint voting when the time comes for a constituent assembly (con-ass) to decide on proposed amendments to the 1987 Constitution because it means “goodbye, Senate,” Senate Minority Leader Franklin Drilon said on Wednesday.

Drilon’s remarks came as Sen. Antonio Trillanes IV warned that a shift to federalism would only make the Dutertes, as well as warlords in the country, more powerful.

Trillanes scoffed at Malacañang’s assurance that President Rodrigo  Duterte would step down  in the event the country went the federal way on his watch.

“You will be naive if you will swallow what this President says,” Trillanes told reporters, reminding them of promises that Mr. Duterte had made but failed to deliver, including solving the country’s problems in three to six months.

In a television interview, Drilon warned that the Senate would become “irrelevant” if it voted jointly with the House on proposed changes to the 1987 Constitution in a Con-ass.

“I cannot imagine that the framers of the Constitution contemplated the situation where the Senate’s vote is just equivalent to that of 290 or so congressmen in a joint voting. No senator will agree to this kind of interpretation,” Drilon said.

On Tuesday, Sen. Panfilo Lacson said he did not think the Senate would support the move to amend the Constitution if Senate President Aquilino Pimentel III could not assure the senators that there would be separate voting.

Lacson was referring to a resolution that Pimentel planned to file this week calling on the Senate and the House to convene a Con-ass for the amendment of the Constitution that would allow a shift to federalism.

Without Pimentel’s assurance, signing the resolution would amount to “[signing] our death warrant,” Lacson said.

Justifying the need for separate voting, Drilon said the Constitution states that Congress, by three-fourths vote of all of its members, may propose amendments to the basic law of the land.

“Congress has two chambers. Where does it say that we must convene jointly? We can propose amendments to the Constitution separately?” Drilon said.

“We are a bicameral Congress and therefore, we act separately,” he said. “And if we vote jointly, goodbye [Senate].”

Pimentel earlier echoed the need for the Senate and the House to vote separately on proposed constitutional amendments.

Drilon said the minority was open to questioning the matter before the Supreme Court, as ultimately it was the high court that would decide it.

Speaking to reporters, Trillanes said he was against any moves to amend the Constitution because he believed the problem was not the country’s system of government but the people running the system.

Trillanes said he believed President Duterte’s allies were determined to railroad the amendment of the Constitution and that the talk of canceling midterm elections in 2019 and term extensions were intended to entice lawmakers to agree to a Con-ass to do the job.

He said the objective of the administration was to stay in power indefinitely.

Once Congress starts to work on amending the Constitution, this could no longer be stopped, Trillanes warned.

“If we are under an administration that can be trusted not to abuse power, [Charter change] can be done. But Duterte, who has no authority to kill people, is doing it. Will you trust him with tinkering with the Constitution? That is a trap. I won’t fall for that,” he said.

Trillanes said he had studied the federalism proposal and concluded that it should not be adopted in the Philippines because of the kind of politics in the country.

He also questioned whether there were members of the House who were “inspiring figures … who will be engines [of] change” since under federalism, congressmen will be ministers in the government.

Sen. Francis Pangilinan said he would resume on Jan. 17 the hearings on the  resolutions of Drilon and Senators Richard Gordon and Juan Miguel Zubiri to amend the Constitution.

Among the matters that will be raised in the hearing is the question of joint or separate voting on proposed amendments to the Constitution, he said.

In a statement, Pangilinan said the hearing would discuss whether there was a need to amend the Constitution and if it should be, which parts should be amended.

The hearing will also tackle the question of how to amend the Constitution—by Con-ass or by constitutional convention (Con-con), he said.

It will also discuss joint or separate voting if the choice is a Con-ass, he said.

Also needing an answer, Pangilinan said, is the question of whether Congress can pass a resolution limiting the power of the Con-ass or the Con-con or whether their powers are plenary.