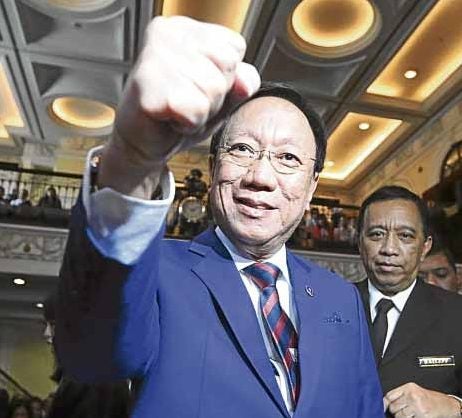 Solicitor General Jose Calida assails the Court of Appeals’
decision and says he will seek a reversal of the ruling in the
Supreme Court. —INQUIRER PHOTO

Fearing a repeat of his escape to Thailand, the Ombudsman has asked the Sandiganbayan to cancel the bail of former Palawan Gov. Joel T. Reyes and order his rearrest despite his appeal of his graft conviction.

In an urgent motion, antigraft prosecutors stressed the need to “prevent [the] recurrence” of Reyes’ previous escape when he was still accused of masterminding the murder of broadcaster Gerry Ortega.

But Reyes’ lawyer, Demetrio Custodio Jr., said it would be absurd to think that Reyes would be a flight risk at this time, considering that he just scored a legal victory at the Court of Appeals (CA) in connection with the murder case.

“Why would he mitigate the value of this victory by fleeing?” Custodio said.

For Malacañang, however, the Office of the Ombudsman’s move to seek the detention of Reyes while he appealed his conviction for graft was commendable.

“That’s how it should be! I commend the [Ombudsman] for the order!” said presidential spokesperson Harry Roque.

The Court of Appeals recently dismissed the murder case, but Roque, who had been the counsel for the Ortega family, slammed the ruling.

Roque said on Monday that Malacañang would seek the reversal of the appeals court’s order.

Solicitor General Jose Calida also assailed the  appeals court’s Jan. 4 ruling, saying he was ready to seek a  reversal of the decision in the Supreme Court.

On Aug. 29 last year, the Sandiganbayan’s Third Division meted out a prison term of six to eight years to Reyes in connection with the irregular renewal of the mining permit of a company that exceeded ore extraction limits.

Over the Ombudsman’s objections, however, the antigraft court still allowed Reyes to post  P60,000 bail—double the bond required when the trial was still pending—while it was resolving his appeal.

At the time of Reyes’ conviction for graft, his murder case was still pending. Since he was still detained in Palawan’s capital, Puerto Princesa City, at the time, the Sandiganbayan found no reason to deny him bail.

Despite the Court of Appeals’ decision to set aside the Palawan Regional Trial Court’s finding of probable cause in the Ortega murder case, Reyes managed to walk free that day, thanks to the bail he had long posted on his  corruption cases pending in the Sandiganbayan.

Because Reyes is no longer detained, prosecutors in the mining permits case asked the court to reconsider its grant of bail because “the circumstances … had changed.”

Prosecutors reminded the court that “accused Reyes was a fugitive,” having fled the country with his brother, former Mayor Mario Reyes of Coron town in Palawan, in March 2012 following their indictment for Ortega’s murder in January 2011.

During their escape, the brothers reportedly led a lavish lifestyle in Phuket, Thailand, before they were arrested in September 2015 for violation of immigration laws.

“Had it not been for the intervention of Thai authorities, accused Reyes would not have been deported to face the criminal charges against him,”  the motion filed by the Office of the Special Prosecutor said.

“Considering accused Reyes’ previous record and to prevent its recurrence, the cancellation of his bail and his immediate commitment to prison are warranted,” it added.

The Aug. 29 graft conviction arose from the renewal of the small-scale mining permit of Olympic Mines and Development Corp. (OMDC) for two years from April 6, 2006, to April 5, 2008.

Prosecutors questioned the renewal because OMDC had exceeded the annual maximum extraction limit of 50,000 dry metric tons (DMT) of ore and because it had used heavy equipment in violation of small-scale mining laws.

Notably, the mining company’s permit was even renewed seven months ahead of its Nov. 3, 2006, expiration, because it had exhausted its limit too early.

OMDC operated in the southern Palawan towns of Narra and Sofronio Española.

Reyes also faces 36 counts of graft in the Sandiganbayan’s Second Division in connection with irregularities stemming from 209 contracts funded by P1.53 billion in royalties from the Malampaya gas field in 2008 and 2009.

Prosecutors accused Reyes of awarding 209 public works contracts to 11 construction companies in 2008, which were attended by violations of the Government Procurement Reform Act.

The infrastructure contracts were also allegedly disadvantageous to the government because these contained a clause requiring the payment of liquidated damages in case of project delays.

Ortega’s murder was attributed by local media to his exposé on the allegedly irregular use of Malampaya funds.

Reyes had also been charged with graft in connection with the misuse of P3.25 million in fertilizer funds in 2004, but the Sandiganbayan’s Fifth Division threw out the case in May due to unreasonable delays in the Ombudsman’s investigation. —VINCE F. NONATO WITH A REPORT FROM LEILA B. SALAVERRIA