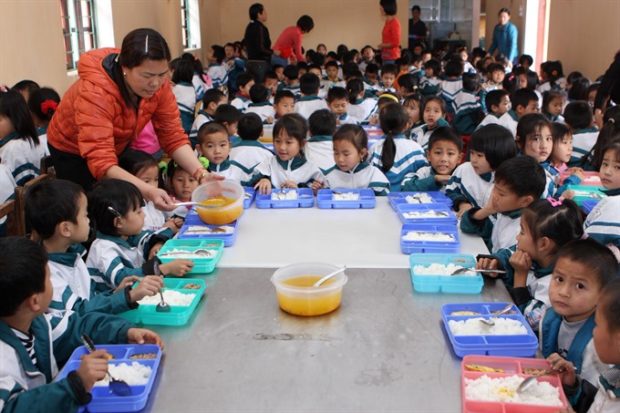 In 2017, more than two million children in Vietnam were stunted and 1.2 million were underweight, according to a report by National Institute of Nutrition. In particular, the report said one in every six children under five years old was below normal height.

One in every four children under five years old was also said to be underweight.

Even more startling is the fact that about 5,000 children are said to die each year in Vietnam from ailments related to malnutrition.

Meanwhile, the General Medical Association of Vietnam revealed at a scientific conference on stature last September that Vietnamese have a low average height compared to the rest of the world.

The average height of Vietnamese men and women – 164.4 cm and 153.6 cm – is ranked 19th and 13th respectively among the shortest nations in the world.

Son said that a child who was stunted at the age of three would not reach average height by the time he or she was 18.

He quoted statistics that suggest height and physical fitness are said to be dependent on genetic factors (23 per cent), living conditions (25 per cent), physical activity (32 per cent) – and nutrition.

However, Dr Son claimed that Vietnamese children were not fed properly. Despite the fact that child diets had improved, they had not yet met recommendations by the World Health Organisation nor provided the balance and diversity needed for proper growth. He said many children lacked important nutrients, including Vitamin A, calcium, zinc and iron.

“Not only stunted children, but also obese ones lack micro vitamins,” he said.

The 32-year-old mother said that she spent most of the day feeding her son. A cup of nutrient-rich milk, an egg and a piece of cheese for his breakfast, a bowl of sea food soup for brunch at 9 am and lot of meat or fish for lunch and dinner.

She said that she was so sad and worried because the son was “smaller and shorter” than other children of the same age.

Many other mothers still believe that diets with lot of protein can boost a child’s growth.

She said that a reasonable meal should consist of carbohydrates (65-70 per cent), protein (12-14 per cent), fat (18-20 per cent) – plus fruit and vegetables to provide vitamins, minerals and fibre.

Former vice director of the institute, Nguyen Thi Lam, said that height and physical fitness of children should be a concern even during pregnancy.

She said children should be breast fed for 24 months and provided reasonable quantity of variety of food during weaning.

Milk providing calcium should be taken an hour after a meal in the morning or noon.

In addition to reasonable diets, parents should help children get used to physical activities, Lam said.

For example, children from two to five should walk, run and cycle, while those from six to seven should swim, run or play football. Those over eight years old should ride bikes, play basketball, football or swim.

With proper diets and physical schemes, Vietnamese could grow to an average height of 1.7 metres, she said.