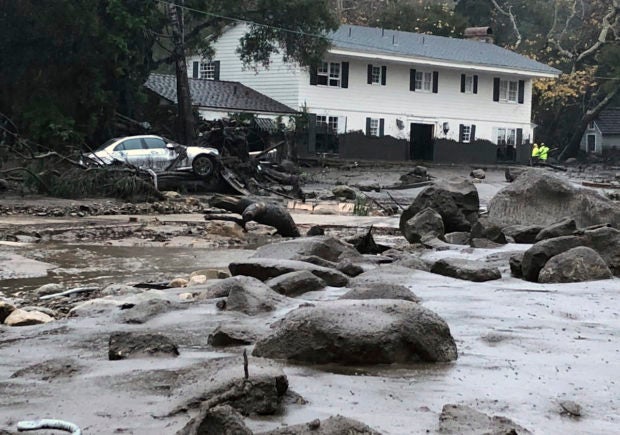 In this photo provided by Santa Barbara County Fire Department, mud and debris flow due to heavy rain in Montecito. California, Tuesday, Jan. 9, 2018. A fire official says at least 8 people have been killed by mudslides that swept Southern California homes from their foundations as a powerful storm drenched recent wildfire burn areas. AP

MONTECITO, California, United States — At least eight people were killed and homes were torn from their foundations Tuesday as downpours sent mud and boulders roaring down hills stripped of vegetation by a gigantic wildfire that raged in Southern California last month.

Rescue crews used helicopters to pluck people from rooftops because debris blocked roads, and firefighters pulled a mud-caked 14-year-old girl from a collapsed Montecito home where she had been trapped for hours.

“I thought I was dead for a minute there,” the girl could be heard saying on video posted by KNBC-TV before she was taken away on a stretcher.

All eight deaths were believed to have occurred in Montecito, a wealthy enclave of about 9,000 people northwest of Los Angeles that is home to such celebrities as Oprah Winfrey, Rob Lowe and Ellen DeGeneres, said Santa Barbara County spokesman David Villalobos. At least 25 people were hurt.

The mud was unleashed in the dead of night by flash flooding in the steep, fire-scarred Santa Ynez Mountains. Burned-over zones are especially susceptible to destructive mudslides because scorched earth doesn’t absorb water well and the land is easily eroded when there are no shrubs.

The torrent of mud early Tuesday swept away cars and destroyed several homes, reducing them to piles of lumber. Photos posted on social media showed waist-deep mud in living rooms. 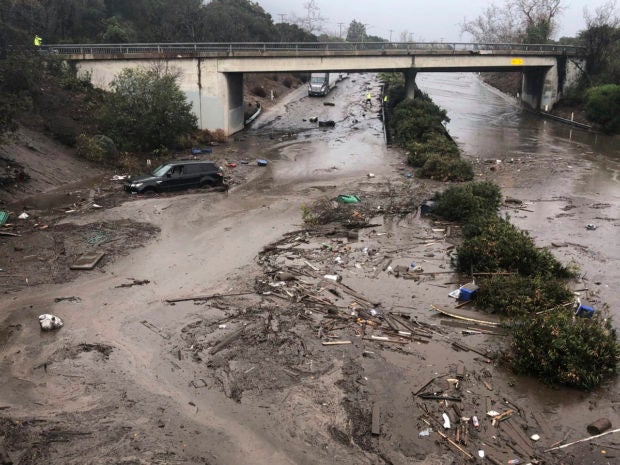 In this photo provided by Santa Barbara County Fire Department, U.S. 101 freeway at the Olive Mill Road overpass is flooded with runoff water from Montecito Creek in Montecito, California, on Tuesday, Jan. 9, 2018. AP

Some residents were unaccounted for in neighborhoods hard to reach because of downed trees and power lines, Santa Barbara County Fire Department spokesman Dave Zaniboni said.

“I came around the house and heard a deep rumbling, an ominous sound I knew was … boulders moving as the mud was rising,” said Thomas Tighe, who discovered two of his cars missing from the driveway. “I saw two other vehicles moving slowly sideways down the middle of the street in a river of mud.”

Authorities had been bracing for the possibility of catastrophic flooding because of heavy rain in the forecast for the first time in 10 months.

Evacuations were ordered beneath recently burned areas of Santa Barbara, Ventura and Los Angeles counties. But only an estimated 10 to 15 percent of people in a mandatory evacuation area of Santa Barbara County heeded the warning, authorities said.

Marshall Miller, who evacuated his home in Montecito on Monday with his family, returned to check for damage and found his neighborhood devastated. He never reached his home because two of his neighbors, an elderly woman and her adult daughter, needed a lift to the hospital after being rescued by firefighters.

The pair had left their house before it was inundated with 6 feet (1.8 meters) of mud, but they got trapped outside in the deep muck.

“It was sobering,” Miller said. “I saw them covered in mud and shaking from the cold.”

The path of the deluge was graphically illustrated on the side of a white colonial-style house, where a dark gray stain created a wavy pattern halfway up the front windows.

Cars were washed off roads, and one was deposited upside down in a tangle of tree limbs. In Los Angeles, a police cruiser got swamped in tire-deep mud.

A stretch of U.S. Highway 101 that connects Ventura County to Santa Barbara County looked like a muddy river clogged with trees and other debris. A kayak was marooned in the flotsam, and a Range Rover was buried up to its bumpers.

Some of the worst damage was on Montecito’s Hot Springs Road, where the unidentified girl was rescued and residents had been under a voluntary evacuation warning. Large boulders were washed out of a previously dry creek bed and scattered across the road.

A rescuer working with a search dog walked among the ruins of a house as the yellow Labrador wagged its tail and scrambled into a devastated building, looking for anyone trapped inside. Its belly and paws were black from the mud.

The worst of the rainfall occurred in a 15-minute span starting at 3:30 a.m. Montecito got more than a half-inch in five minutes, while Carpinteria received nearly an inch in 15 minutes.

“All hell broke loose,” said Peter Hartmann, a dentist who moonlights as a news photographer for the local website Noozhawk.

“There were gas mains that had popped, where you could hear the hissing,” he said. “Power lines were down, high-voltage power lines, the large aluminum poles to hold those were snapped in half. Water was flowing out of water mains and sheared-off fire hydrants.”

“It was a freaky moment to see her just covered in mud,” he said. “It was scary.”

Hartmann said he found a father-son tennis trophy awarded in 1991 to men his wife knows.

“Both of them were caught in the flood. Son’s in the hospital, dad hasn’t been found yet,” he said, declining to name them.

The communities are beneath the scar left by a wildfire that erupted Dec. 4 and became the largest ever recorded in California. It spread over more than 440 square miles (1,140 square kilometers) and destroyed 1,063 homes and other structures. It continues to smolder deep in the wilderness.

The storm walloped much of the state with damaging winds and thunderstorms. Downtown San Francisco got a record 3.15 inches (8 centimeters) of rain on Monday, smashing the old mark of 2.36 inches (6 centimeters) set in 1872. /cbb