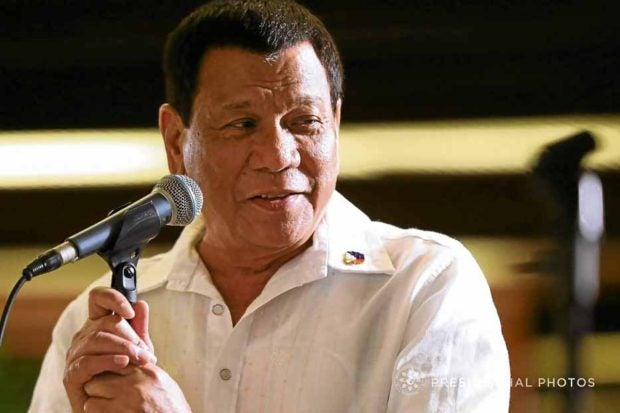 After increasing the salaries of police officers and soldiers, President Duterte wants to give public school teachers their due by doubling their pay as well.

The increase in teachers’ salaries would be funded through the administration’s second tax reform package, according to presidential spokesperson Harry Roque.

“Judging by what he wanted for the PNP (Philippine National Police) and the AFP (Armed Forces of the Philippines), it could be that he is also aiming to double the entry salary for teachers,” Roque said.

Currently, public school teachers’ salaries range from P19,000 to P43,000, depending on their level. In addition, they get allowances and bonuses.

Roque’s announcement came on the heels of the decision of the Department of Education (DepEd) to raise by P1,000 a teacher’s chalk and clothing allowance.

Roque said Mr. Duterte directed the Department of Budget and Management and other agencies to find ways to increase teachers’ salaries through the second tax reform package.

The Department of Finance is set to submit to Congress this month its second set of proposals for reforms in the country’s tax laws.

This follows the recent signing of the Tax Reform for Acceleration and Inclusion Act that increased the take-home pay of most middle-income workers but increased the prices of certain commodities, such as fuel.

The second tax reform package is expected to lower the corporate income tax rate and put them at the same level as that in neighboring countries.

It would also rationalize fiscal incentives. Only those that are performance-based, time bound, targeted and transparent would be granted to investors.

An official of the DepEd expressed gratitude over the possible hefty increase in teachers’ pay.

“But we need to wait for the official legal issuance from Malacañang before we can make any further comment,” Education Undersecretary Tonisito Umali told the Inquirer on Tuesday.

Last year, Education Secretary Leonor Briones said the DepEd was working on various financial literacy programs for teachers because many of them had fallen into debt traps.

She noted then that while she did not oppose any move to raise salaries, the financial literacy of teachers should first be dealt with.

“All of you feel underpaid. Even if I will have an increase in salary, I will still feel that I’m underpaid. That’s because your needs and your wants will always exceed your resources,” Briones earlier said.

“Having an increased income is part of the solution but it will not totally [solve the problem] because you only increase the capacity to borrow.”

The measure doubling the base pay of military and uniformed personnel takes effect this month after the President approved it.

House Majority Leader Rodolfo Fariñas released to reporters on Tuesday a signed copy of Joint Resolution No. 1, which was marked approved on Jan. 1.

The modified base pay schedule for lower-ranked military and uniformed personnel—from candidate soldier to chief master sergeant and their equivalent ranks in the civilian agencies—would be fully implemented beginning Jan. 1.

The personnel ranked as private, police officer 1 or their equivalents will effectively gain a 100-percent pay increase.

The pay schedule for higher-ranked personnel — from first chief master sergeant to general and their civilian counterparts — will be implemented in staggered adjustments on Jan. 1 this year and Jan. 1, 2019.

The resolution provided for the suspension of the pension indexation — the adjustment of pension rates in proportion to the new base pay rates — until Jan. 1, 2019, pending the review of the current pension system.

The resolution also provided for a monthly hazard pay of P540, but repealed the provisional allowance and officers’ allowance granted as an interim supplemental benefit under Executive Order No. 201, series of 2016.