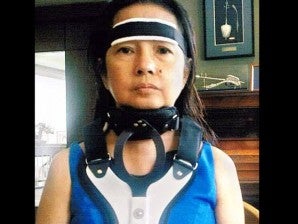 Former President and now Pampanga Representative Gloria Macapagal-Arroyo will wait for the outcome of Friday’s special Supreme Court en banc session before making another attempt to leave the country, according to her spokesperson Elena Bautista-Horn.

Arroyo herself decided against leaving Thursday despite an alleged 12:15 p.m. appointment with an endocrinologist in Singapore so she could rest more as her elevated blood pressure had not stabilized, Horn told the Philippine Daily Inquirer.

Horn said Arroyo was administered intravenous fluids Thursday at St. Luke’s Medical Center in Taguig City, where she would likely await the action of the high court on the Aquino government’s decision stopping her and her husband, Jose Miguel “Mike” Arroyo, from traveling abroad.

“Hopefully, the former President can leave tomorrow (Friday) or Saturday if the Supreme Court will issue a CDO (cease and desist order) to the Department of Justice (DOJ) immediately after its special session,” Horn said.

“Definitely, she wouldn’t want to undergo the same predicament when they were stopped from leaving at the airport. That’s very stressful on her part,” she said.

With the former President in the hospital were her husband and son, Camarines Sur Representative Diosdado “Dato” Arroyo.

Acting on DOJ orders, immigration authorities stopped the former President and her husband  from flying to Singapore on Tuesday night.

Justice Secretary Leila de Lima maintained the watch-list order against Arroyo was in effect pending an oral argument which the Supreme Court has set for Tuesday, November 22.

Horn said that Arroyo’s lawyers had asked the high court to hold the oral argument much earlier so as not to further delay the trip.

On Thursday afternoon, Horn said Arroyo’s appointment with medical specialists in Singapore had been moved tentatively to Saturday but she refused to give the exact time.

Horn said the IV device attached to Arroyo had been removed and that she could move around the room, “but her BP is still fluctuating” and her doctors had been informed. The spokesperson said she did not know what caused the fluctuations.

Horn said that the former President was “eating somehow” in spoonfuls ranging from three to four and that this “loss of appetite” was one of her complaints.

Horn also said Arroyo was “very tired and stressed” as a result of Tuesday’s airport incident but despite her condition, she was still hopeful Arroyo would be able to push through with her travel plans Friday.

“If the doctors clear her, it’s still a very possible option,” she said.

Decision up to Arroyo

Droves of media people waited at a lounge near St. Luke’s Medical Center from Wednesday night to Thursday morning hoping to see Arroyo. Some spent the night on the hospital grounds while others arrived in the wee hours of morning. But Arroyo did not leave her hospital room.

“Her blood pressure is still not stable,” said another Arroyo spokesperson, Raul Lambino. He said the decision to stay came from Arroyo, who felt “weak” following the showdown with immigration authorities at the airport.

Asked when Arroyo would push through with her travel plans, Lambino said it depended on the congresswoman. “When she’s physically fit,” he said.

Speaker Feliciano Belmonte Jr. said it would be better if Arroyo would just wait until the Supreme Court had held oral arguments on the case before making another try to leave.

Belmonte said that as far as Congress was concerned, the House leadership had been accommodating as much as possible of her request to travel under the chamber’s own rules.

Belmonte said he did not believe a legal showdown between the high court and the DOJ would result in a constitutional crisis.

He also said he would not sign a resolution, expected to be filed by Liberal Party members in the House of Representatives next week, supporting the government’s decision to uphold its travel ban against Arroyo.

“As a Speaker, I would like to represent all the various members of the coalition of the majority and not [just] the Liberal Party. I guess eventually, they would like anybody to sign it but as for  me, I’m as much the Speaker of the NPC (Nationalist People’s Coalition) and all the other parties,” he stressed.

On De Lima’s refusal to implement the high court’s temporary restraining order (TRO) against her, which allows Arroyo to travel, House Minority Leader Edcel Lagman said she was inviting trouble.

Zambales Representative Mitos Magsaysay claimed De Lima was to blame for the media circus that resulted from Arroyo’s failed attempt to leave the country to seek medical attention.

“If the government is getting flak for not following the TRO that the Supreme Court itself has decided to grant the Arroyos, it is their own fault because in the first place, they have not yet filed any case against the Arroyos,” Magsaysay said.

“Now that the TRO has been granted, they are stalling for time and rushing so that they could file their case, praying for a technicality,” she added.

Representative Antonio Tinio of the Alliance of Concerned Teachers urged the Arroyo camp to just wait for the oral arguments of the Supreme Court on Tuesday considering that her medical condition was not life-threatening.

Tinio said avoiding another confrontation at the airport might do wonders for her recovery.

“Representative Arroyo should just sit back and relax so as to prepare herself for the coming oral arguments,” Tinio said.

Representative Sherwin Tugna of the Citizens’ Battle Against Corruption called for sobriety.

“(This) should not be seen as a spat between the Supreme Court and Malacañang but as an important issue concerning the greater interest of the country which needs immediate but conscientious resolution for the benefit of the country and the Filipino people,” Tugna said. With reports from Kristine Felisse Mangunay and Erwin Aguilon, Radyo Inquirer 990AM