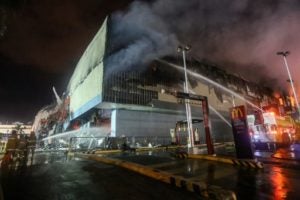 This photo, taken on Dec. 23, 2017, shows firefighters working to put out a fire at the NCCC Mall in Davao City. (Photo by MANMAN DEJETO / AFP)

DAVAO CITY — Two Americans hired by the management of NCCC Mall have arrived here for the conduct of an independent investigation into the Dec. 23 fire that killed 38 people.

Senior Supt. Jerry Candido, the spokesman of the Inter-agency Anti-Arson Task Force (IAATF), said the two American investigators from Washington, DC, had paid him a courtesy call and informed him of their interest to coordinate with local fire authorities during their probe.

“They are hired by the NCCC as third-party investigators, so we assigned someone to assist them,” Candido told reporters here on Tuesday.

He said the NCCC management had wanted a third-party probe of the incident.

Candido said the American fire investigators could start their work as soon as possible.

Earlier, Candido said the IAATF had found several violations on the part of NCCC Mall and Survey Sampling International (SSI), which had contributed to the tragedy.

The NCCC management denied it had committed violations, maintaining that the four-storey mall in Barangay Ma-a had been certified as fire safety compliant.

“We wish to stress though that the mall had passed through all the needed safety examinations and was certified by authorities as being safe to operate and serve the public,” Thea Padua, NCCC spokesperson, said in a statement.

“This stringent certification process included passing requirements for the adequate provision of such public safety systems as fire alarms and sprinklers, fre exits and emergency procedures including fire drills,” she added.

Candido said they were looking at the fire safety compliance documents issued to the mall and SSI.

Criminal indictments over the tragedy could include retired local fire officials, he added.

But he clarified that they had not established as of yet who should be held liable for the fire that also cost P1.6 billion in property damage.

“We are giving ourselves two weeks [to wrap up the investigation],” Candido told the Inquirer by phone on Monday.

But he said the timetable could be shortened if documents and other pieces of evidence that they had been gathering would be sufficient to determine liabilities and for the filing of criminal charges against those found to be responsible for the tragedy.

As this developed, the association of business process outsourcing companies in the city said it would evaluate emergency procedures in all BPO work places in the wake of the tragedy.

Information and Communication Technology (ICT) Davao President Samuel Matunog said the evaluation would be based on the result of the IAATF investigation.

“When the result of the investigation is known, we will call the association (into a meeting), we will gather together, sit down and review our emergency procedures,” Matunog said.

Matunog said ICT-Davao would also make an appeal to the Philippine Economic Zone Authority (PEZA) to reconsider its order suspending operations of SSI in Davao.

“Our appeal to PEZA is to look at it [suspension[ again,” Matunog said. “We have the obligation to take care of the remaining workers. The remaining 480 workers could still earn about P900 million income [for SSI] and P97 million in compensation per year. That’s substantial if totally lost.”

He said ICT-Davao was planning to help SSI rebound in an alternative location. /atm