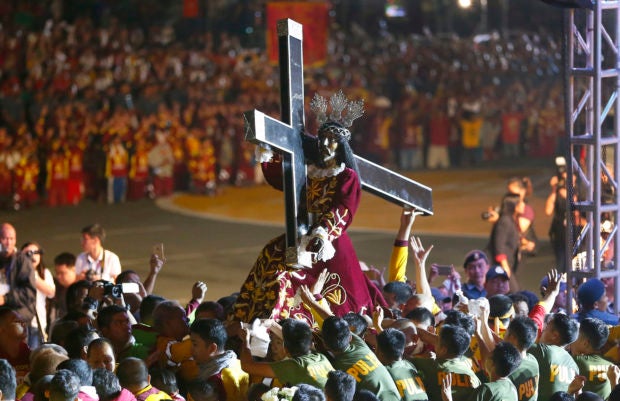 Catholic devotees mount the image of the Black Nazarene on a hearse prior to a raucous procession to celebrate its feast day Tuesday, Jan. 9, 2018, in Manila. A massive crowd of mostly barefoot Catholics joined an annual procession of a centuries-old statue of Jesus Christ under tight security amidst fears of possible attacks by Islamic extremists. (Photo by BULLIT MARQUEZ / AP)

If Director General Ronald dela Rosa, chief of the Philippine National Police (PNP), could have just one wish to the Black Nazarene, it would be to eradicate the country’s drug problem.

Speaking to reporters at Plaza Miranda in Quiapo, Manila on Tuesday, dela Rosa said he would no other wish but to put an end to the scourge of illegal drugs.

Dela Rosa arrived at the procession area late in the afternoon. At that moment, he saw the Andas, or the carriage carrying the holy image, while it was being pulled down from a bridge.

He said it was a thrilling experience to see the Andas right before him.

[We are wondering why we reached the bridge, the Andas was there.]

[It was thrilling. My hair stood out on end. It seemed to be perfectly timed.]

Dela Rosa, who is set to retire from the PNP in March, has been at the helm of the police campaign against illegal drugs that has killed thousands of suspected drug pushers. /atm