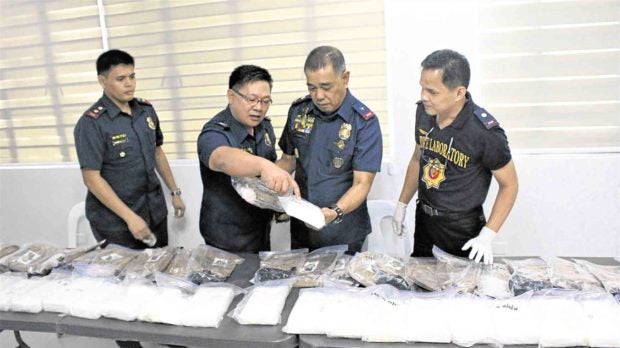 TACLOBAN CITY-The Police Regional Office in Eastern Visayas (PRO-8) has issued a notice to the public to report the presence of blue containers floating in the waters as these might contain cocaine.

The appeal was posted on the Facebook account of PRO-8 which read: “Police Regional Office 8 encourages the public, especially those in the coastal areas of Northern Samar, Samar and Eastern Samar to be vigilant on this. Anyone who may find this container is obliged to report to the nearest police station.”

Finders should not attempt to sell, deal or use the cocaine but should instead report to the police. In exchange, they would get one sack of rice per pack, according to the post.

The appeal stemmed from the suspicion that the Chinese-registered cargo vessel forced to anchor in the waters off Pambujan town in Northern Samar was a “cocaine vessel,” the post said.

It also said cocaine was found inside the blue containers found in Matnog, Sorsogon which is located close to Northern Samar./

The vessel Jin Ming Number 16, which had nine crew on board, made an emergency docking in Pambujan on Jan. 2 after it was battered by strong waves spawned by Tropical Storm “Agaton.”

The next day, 24 kilos of cocaine were recovered along the shore of Matnog. The cocaine were believed to have come from Jin Ming Number 16.

“We will let you know if we have found any contraband inside the vessel,” Urgel said.

Rommel Tepace, information officer of the municipal government of Pambujan, said initial search inside the ship showed that it was loaded with 1,700 cartoons of liquor bottles with labels in Chinese characters, several blue fish crates and freezers containing meat and chicken.

“The Coast Guard did not find anything inside the vessel, aside from these items,” said Tepace, in a phone interview.

He added that the Coast Guard continued to drain the vessel of water especially in the engine room where a hole was found.

Once they were done removing the water, he added, the vessel would be towed in the ports of either San Jose or San Isidro towns, both in Northern Samar.

Tepace also disclosed that the nine Chinese crew were still in the custody of Pambujan Mayor Felipe Sosing. “They are ok. We are taking good care of them considering that they are foreigners,” he said.

The cargo vessel departed from China on December 12 on its way to Chile to procure some goods.

While sailing in the waters off Pambujan, it encountered strong winds and waves spawned by tropical storm ‘Urduja’ resulting it to make a distress call.

Read Next
DILG Usec Diño to barangay execs: Submit drug list or face ax
EDITORS' PICK
Manila is 78th most expensive city in the world for foreign workers
TeaM Energy pushes development programs to help in pandemic rebound
Want to help local farmers? Shop small and eat Real Food
Piolo Pascual: The Ultimate Heartthrob continues to level up
ICC is everything but a court of ‘white people’
Garcia softens stance, meets IATF halfway on swab-upon-arrival policy
MOST READ
Sharon Cuneta on living in the US: ‘Nagagawa ko lahat ng normal na bagay’
ICC is everything but a court of ‘white people’
Duterte-Duterte tandem possible but ‘winnability is another question’ — Binay
More than 150,000 voters wiped off the registration list – Comelec
Don't miss out on the latest news and information.