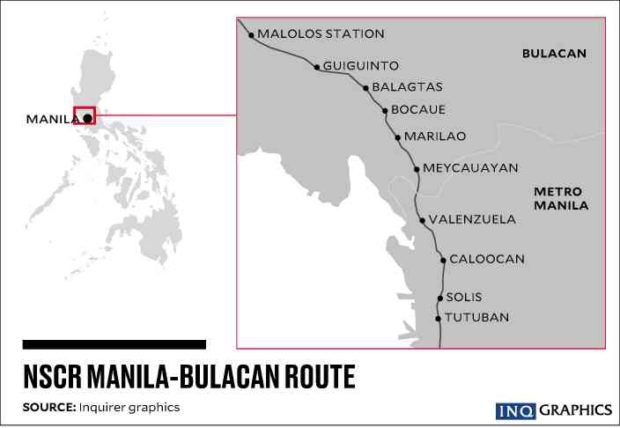 MARILAO, Bulacan — Saying it was time to “stop the talk and start the work,” Transportation Secretary Arthur Tugade on Friday led a ceremony here meant to show that the government was bent on proceeding with the construction of a 106-km Manila-to-Clark railway project that Tugade said marked the start of the country’s “golden age of infrastructure.”

This town would serve as construction yard for the P105-billion project, officially called North-South Commuter Railway (NSCR), which would start as soon as the government commissions a contractor.

Marilao represents the 38th kilometer of the railway’s Phase 1. The railway would have four stations in Metro Manila—Tutuban, Solis, Caloocan and Valenzuela—and six stations in Bulacan province that would be built along the rail route passing through the City of Meycauayan, City of Malolos and the towns of Marilao, Bocaue, Balagtas and Guiguinto.

The second phase of the project covers tracks connecting Malolos and the Clark Freeport, which hosts the Clark International Airport (CRK).

“This project stops the talking [and] starts the Philippine age of golden infrastructure,” Tugade said in a speech before national and local officials here during the groundbreaking ceremony.

Once the railway was completed, trains were expected to ferry 350,000 passengers daily from Tutuban to Clark. Train rides from Manila to Malolos would take 35 minutes.

The project sought to reduce road congestion in Metro Manila and provide quick access to the CRK, which had been designated as the country’s second international gateway to ease air traffic at Ninoy Aquino International Airport.

The Duterte administration had availed itself of a soft loan from the Japan International Cooperation Agency payable in 40 years with an interest rate of 0.1 percent annually and a 12-year grace period for settling the principal amount.

Tugade said the government started development work while it awaited the bidding for the construction work to take place. He said a contractor was expected to be named in April this year.

He added that families in Marilao along the rail route had agreed to leave their homes provided they were given a resettlement area.

Japanese Ambassador Koji Haneda said the project “will bring better connectivity, convenience, tourism and investment and will raise the standard of living of the people north of Metro Manila.” —Carmela Reyes-Estrope