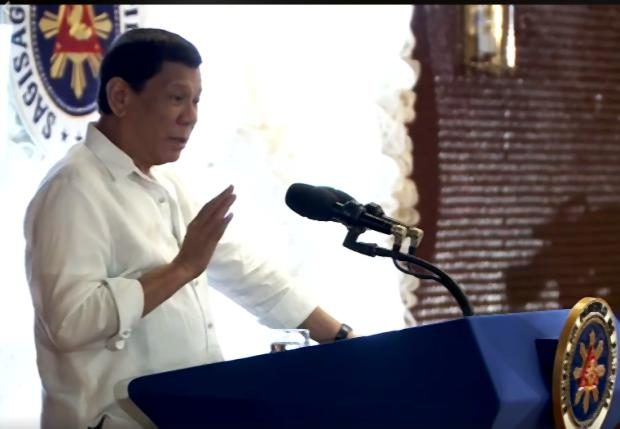 President Rodrigo Duterte remains to be the most approved and trusted government official in the country, with eight out of 10 Filipinos favoring his work and trusting him, the recent Pulse Asia survey showed on Friday.

Duterte got an approval rating of 80 percent and trust rating of 82 percent in the December 10 to 15 and 17 national survey of Pulse Asia.

In the same survey, Vice President Ma. Leonor “Leni” Robredo got an approval rating of 59 percent and a trust rating of 58 percent.

Robredo got majority of approval and trust rating in nearly all geographic areas and socio-economic classes except for the National Capital Region (NCR) and class ABC.

The approval rating of Robredo rose by two percent from the 57 percent in September 2017 to 59 percent in December 2017.

Senate President Aquilino Pimentel III got a national approval of 57 percent and a trust rating of 53 percent while Speaker Pantaleon Alvarez had 42 percent approval rating and 37 trust rating.

Pimentel has majority approval ratings in all geographic areas and socio-economic groupings from 53 percent to 61 percent, and 56 percent to 59 percent, respectively.

He also enjoyed majority figures across all geographic areas from 54 percent to 57 percent and every socio-economic class from 53 percent to 56 percent.

The Senate President, however, failed to gain the trust of most Visayans at 47 percent.

Alvarez, meanwhile, only obtained a majority of approval rating at 53 percent in Mindanao.

The approval rating of Alvarez increased by 9 percentage points from 33 percent in September 2017 to 42 percent in December 2017. 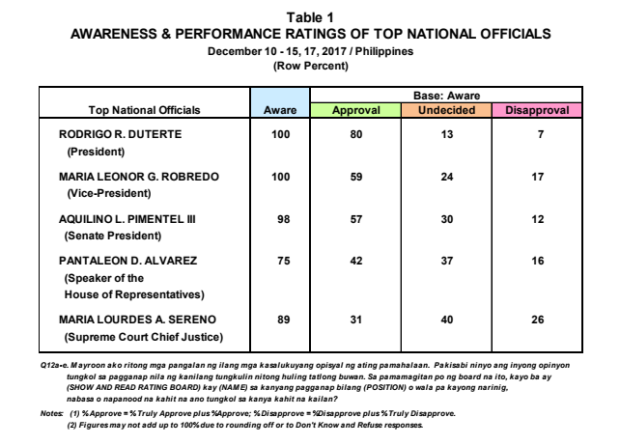 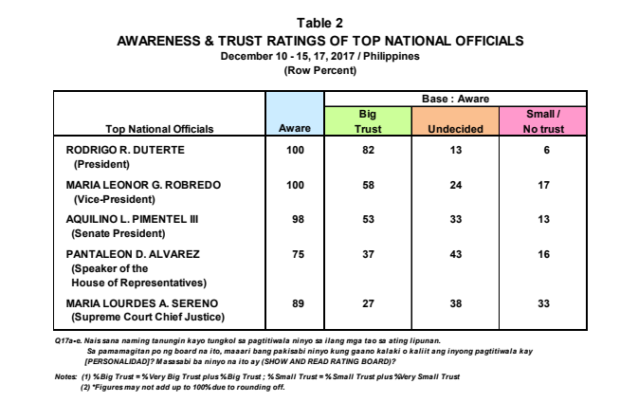 Read Next
Bato keeps mum on possible Senate run
EDITORS' PICK
Acer starts the year off strong with the Aspire Vero National Geographic Edition
Over 3 Million worth of prizes to be won at Smart Padala’s SENDali Manalo Promo!
COVID-19 cases in City of Manila are decreasing, says OCTA
DOH: Too early to say COVID-19 cases are declining
The best of bayside and city living at SMDC’s Sail Residences
Gov’t rolls out COVID-19 vaccination in select pharmacies on Jan. 20 to 21
MOST READ
Comelec junks petition to scrap Bongbong Marcos COC
In Batanes, octogenarian dies of COVID-19
Marcos Jr. visits Cebu, stands as ‘ninong’ to mayor’s son
When to get boosters after positive COVID test
Don't miss out on the latest news and information.