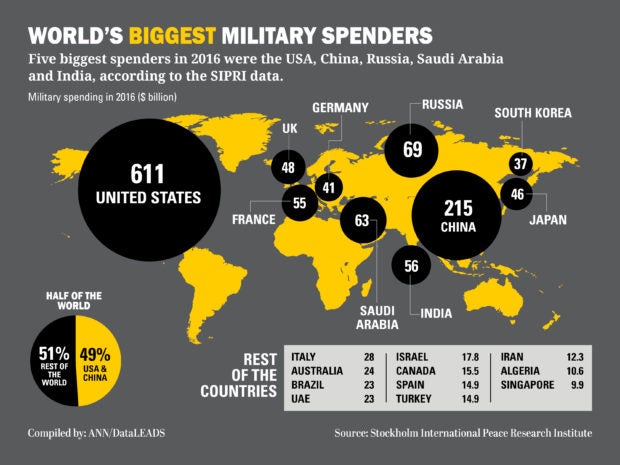 Interestingly when it comes to military spending per person and as a percentage of total government budget, the U.S. falls behind countries like Israel and Saudi Arabia.

Global defense spending rose to 1.69$ trillion in 2016 with the United States at the top of the list, as per the SIPRI data. The country’s defense expenditure grew by 1.7 per cent from 2015 taking the annual spending to 611 billion dollars in 2016. Despite the growth the spending still remains 20 per cent less than the peak in 2010, the report stated.

Russia is the third largest military spender with an annual defense budget of 69 billion dollars.

Saudi Arabia’s defense budget of 63 billion dollars in 2016 makes it the largest military spender in the region and the fourth largest in the world. While Saudi Arabia had been increasing its military spending since 2002, its spending in 2016 was a 30 per cent decrease on what it spent in 2015.

France, the top military spender in Europe and the sixth in the world spend 55 billion dollars followed by the UK and Japan at seventh and eighth position. The defense expenditure ranking of UK fell which is attributed to devaluation of the pound as the fall out of UK’s exit from the European Union.

Germany raised its military spending by 2.9 per cent to 41 billion dollars in 2016, with Chancellor Angela Merkel’s efforts to push through an increase in the military budget.

Japan and South Korea made it to the list of the top ten military spenders owing to the tensions between South Korea and North Korea, China and Japan which offer their respective governments a justification towards such spending.

World military expenditure of 1.69 trillion is estimated to be equivalent to 2.2 per cent of the global gross domestic product (GDP) or $227 per person, as per the report. The 2016 estimate is a seen as a minimal increase of about 0.4 per cent on 2015.The increase or decrease in military spending is attributed to various factors like conflict, perception of security, oil price and income, according to the SIPRI report.