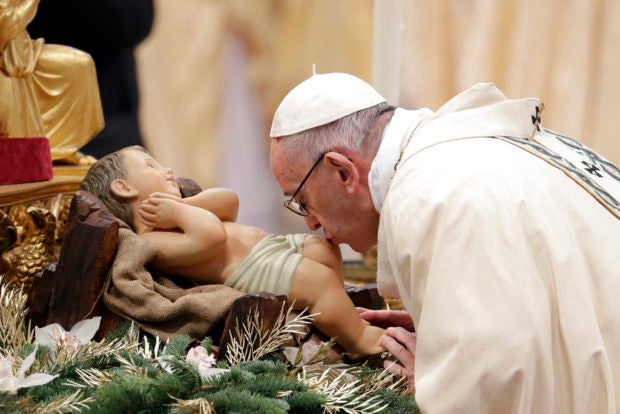 Pope Francis kisses a statue of the Divine Infant Jesus as he arrives to celebrate an Epiphany Mass in St. Peter’s Basilica at the Vatican, Saturday, Jan. 6, 2018. AP

VATICAN CITY — Pope Francis on Saturday advised against making the pursuit of money, a career or success the basis for one’s whole life, urging in his Epiphany remarks to also resist “inclinations toward arrogance, the thirst for power and for riches.”

During a homily at Mass in St. Peter’s Basilica, Francis said people “often make do” with having “health, a little money and a bit of entertainment.” He urged people to help the poor and others in need of assistance, giving freely without expecting anything in return.

Many Christians observe Epiphany to recall the three wise men who followed a star to find the baby Jesus. Francis suggested asking “what star we have chosen to follow in our lives?”

“Some stars may be bright, but do not point the way. So it is with success, money, career, honors and pleasures, when these become our lives,” the pope said, adding that path won’t ensure peace and joy.

Later, during an appearance from his studio window overlooking St. Peter’s Square, Francis urged tens of thousands of faithful gathered below not to be indifferent to Jesus.

“Instead of conducting themselves in coherence with their own Christian faith, they follow the principles of the world, which lead to satisfying the inclinations toward arrogance, the thirst for power and for riches,” Francis said. He prayed instead that “the world makes progress down the path of justice and of peace.”

Francis noted that some Eastern Rite Catholic and Orthodox churches were celebrating Christmas this weekend and offered his cordial wishes to these believers.

“May this glorious celebration be a source of new spiritual vigor and of communion among us Christians,” he said.

In Istanbul, the Greek Orthodox Christian community celebrated Epiphany with the traditional blessing of the waters. Ecumenical Patriarch Bartholomew I, the spiritual leader of Greek Orthodox Christians and the Archbishop of Constantinople, led the liturgy Saturday at the Patriarchal Cathedral of St. George for Epiphany, commemorating the baptism of Jesus Christ.

Several blessings of the waters took place across Istanbul. The ceremony consists of a cross being tossed into the water to be retrieved by swimmers.

In many places in Europe, Epiphany is a day where children receive gifts or enjoy special entertainment. Rome’s Piazza Navona is famed for a holiday market with many toy stalls. Children believe the Befana witch on a broom brings the well-behaved toys, while those who haven’t behaved get lumps of charcoal.

For crowd control and security, visitors this year to Piazza Navona patiently underwent metal detector checks and authorities limited those entering the vast oval space to no more than 12,000 at a time.

On city sidewalks throughout Spain, parents and their children came out to enjoy the day. On Epiphany eve Friday, streets across Spain were packed with families watching Epiphany parades with decorative floats, camels, clowns and jugglers. Some performers tossed candy to the crowds.

In recent years, security for Epiphany and other holidays has been tightened in Madrid and Barcelona amid fears of potential terror attacks, with large vehicles banned from streets near the parades.

In Poland, the head of the Catholic Church in Warsaw spoke out in support of migrants during an Epiphany procession in the Polish capital. The procession Saturday in Warsaw was held under the motto “God is for everyone” and Warsaw Archbishop Cardinal Kazimierz Nycz says that means no one should be seen as an “alien.”

His words seemed directed at the conservative Polish government, which has many officials who are Catholic but they refuse to accept Muslim migrants into Poland.

In Mexico City, aid workers brought toys and other gifts to brighten the Epiphany holiday for homeless children living in dozens of makeshift tent camps more than three months after a deadly earthquake.

The date — Jan. 6 — is commonly known as “Day of the Magi” in Latin America, and it’s when children traditionally receive holiday gifts rather than on Christmas Day.

Uriel Martinez, 8, woke up early Saturday to find a toy gun had been left for him overnight. That made him happy because he wants to be a soldier when he grows up.

“I heard the kings come, but then I went back to sleep,” he said. /cbb /atm