Filipinos of the Year 2017: Pinoy Ako Blog and other voices vs fake news 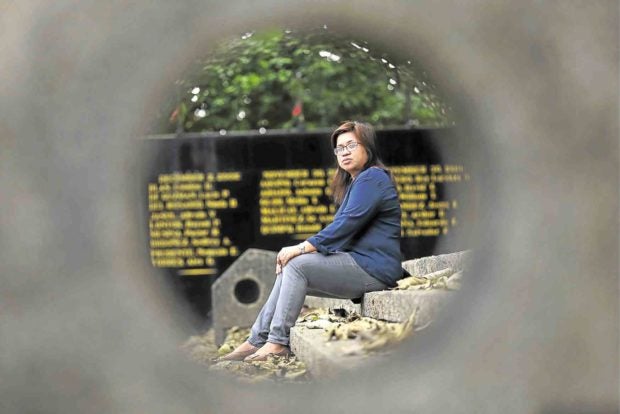 In a year that saw the beginning of a pushback against the organized production and distribution of false information, the blogger Jover Laurio — the lone, once-anonymous, much-abused person behind Pinoy Ako Blog (PAB) — stood out for her patriotic daring, the frequency and freshness of her posts, the dark humor of her blog, and, not least, the courage she showed in the face of overwhelming personal abuse.

At the same time, she was also and only a part of a growing chorus of voices resisting the “fake news” that overflowed social media platforms and that sometimes even spilled out of the mouths of government officials.

For holding public officials to account for their statements, for proving that the democratic ideal of governance is not mere consent of the governed but informed consent, for insisting on the facts that cast light on the truth, Jover Laurio and other voices against fake news are the Inquirer’s Filipinos of the Year.

Every year since 1991, the Philippine Daily Inquirer seeks to recognize the Filipino who, in the judgment of the newspaper’s editors, made the most positive impact on the life of the nation.

Since 2012, the pool of editors has expanded to include the news managers of other news-related operations in the Inquirer Group: Inquirer.net, Radyo Inquirer, Cebu Daily News, Inquirer Bandera and Megamobile.

The honor roll of past Filipinos of the Year includes volcanologist Raymundo Punongbayan (the first honoree), lawyer Haydee Yorac, priest-turned-politician Among Ed Panlilio, and boxing icon Manny Pacquiao (first in 2003, when he shot to world fame, then again in 2008, when he cemented his legacy as one of the greatest fighters of all time).

The Filipino of the Year honor has also been bestowed on personalities whose recent passing left a void: Fernando Poe Jr. in 2004, Jesse Robredo in 2012, and Letty Jimenez-Magsanoc, the Inquirer’s editor in chief for a quarter-century, in 2015.

Collectives have been recognized, including the Supreme Court in 2001, Filipino volunteer rescuers in 2009 (Tropical Storm “Ondoy”) and 2011 (Tropical Storm “Sendong”); the “Tres Marias” Sen. Leila de Lima, Ombudsman Conchita Carpio Morales and former Commission on Audit Chair Grace Pulido-Tan in 2014; and the antirevisionists who protested the rehabilitation of the Marcoses in 2016.

In the search for the 2017 Filipino of the Year, 49 out of a total of 51 editors voted. A plurality of 20 chose Laurio; 17 editors voted for the soldiers and police officers who defended the Islamic City of Marawi. (See “The defenders of Marawi”).

Senior Associate Justice Antonio Carpio of the Supreme Court and Sister Ma. Juanita Daño of the Religious of the Good Shepherd with Centerlaw received six votes each.

Editors nominated Carpio for “his relentless campaign to educate Filipinos on their birthright and the West Philippine Sea,” and Daño for “initiating the documentation of 35 drug killings in San Andres Bukid, Manila, that became the basis of a petition urging the Supreme Court to issue a writ of amparo to protect the community from police harassment.”

Laurio, who started PAB first on Facebook in December 2016 and then as a stand-alone site in February 2017, was nominated—it bears pointing out—by journalists, whose job it is to get “the best obtainable version of the truth.” (The famous quote is from reporter Carl Bernstein of Watergate fame.)

Those who submitted her name for consideration as representative of others cited her as “the voice of facts,” lauded her for “exposing fake news,” noted her “in-your-face ‘counterblogs’ complete with documented proof [that] handily thrash and expose … fake news and disinformation.”

Editors who voted for her and others like her explained why “voices against fake news …. are so important in this age of murky reporting and deliberate manipulation,” and why “the country needs people who can ‘separate the grain from the chaff,’ to identify what’s real and what’s fake.”

They said their choice was meant “to stand not only for the PAB blogger but also for anyone who speaks out for truth and facts, and fights lies and deception that threaten our democracy. It is our profession’s fight for survival — the profession of journalism and the institution that is traditional media.”

Is there a contradiction in the very act of journalists praising bloggers and social media commentators like Laurio, “in a time where truth and veracity have been minimized because of agenda and politics?”

In fact, in an informal survey that the Inquirer conducted to list the other voices who have fought the good fight against lies and disinformation, the names of many journalists were mentioned, including those of Ellen Tordesillas, Lourd de Veyra, Raissa Robles and Sylvia Mayuga, and the work of news organizations or associations like Vera Files and the National Union of Journalists of the Philippines were cited.

There are many more journalists, including columnists and reporters from the Inquirer.

There are many more names, including those of Justice Carpio [again] and Associate Justice Marvic Leonen. Special mention was made of Samira Gutoc Tomawis, who has been exposing human rights violations in Marawi.

Fake news has been around since humans learned to communicate beyond the grunt and the gesture. The emergence of the internet as the world’s de facto media environment and the rise of social media, however, have made it easier to manufacture false information and even easier and much faster to circulate it. But a well-informed citizenry is not only a democratic ideal; it is basic to any society.

Early in 2017, the Catholic Bishops’ Conference of the Philippines issued a pathbreaking “pastoral exhortation” against fake news. The letter defined what is at stake.

“Crucial decisions — personal and social — depend on the accurate grasp of facts. ‘Alternative facts’ and ‘fake news’ engender faulty decisions, many times with disastrous long-term consequences to persons and to communities. Sadly, we see this happening today. There are persons who have given themselves to the service of reporting what never happened, concealing what really happened and distorting what should be presented in a straightforward manner.”

While the term itself has now been both weaponized (for instance, US President Donald Trump calls any story derogatory to him “fake news”) and at the same time neutralized (because it can mean anything, it has been rendered useless), there is great value in knowing precisely what the term actually means.

Maureen Sullivan, once public editor at the New York Times and now media critic at the Washington Post, reminds us: “Fake news has a real meaning — deliberately constructed lies, in the form of news articles, meant to mislead the public.”

In the media literacy talks that the Inquirer conducts, fake news is defined as the 3Ds: It is a Deliberate act of fabrication or manipulation; Disguised to look, sound, or feel like the news; and designed to Deceive.

(The first element accounts for accidents and mistakes; the third allows for such forms as satire or parody.)

Part of the reason Laurio became the symbol of the pushback against fake news is the way she became the focus of the fake news producers; in a very real sense, they made her what she is today.

The abuse heaped on Laurio, the harassment she received, the hate directed her way once President Duterte’s key social media supporters had identified her in a calculated, cynical act of “doxxing” (the malicious outing of private information, including personal identity), was overwhelming.

It recalled the same kind of orchestrated outrage which swarmed De Lima, Vice President Leni Robredo, journalist Maria Ressa, and many others perceived as opposed to or critical of either the President or the failed vice presidential candidate Sen. Ferdinand Marcos Jr.

This organized campaign against Laurio turned her into a representative voice. Why? Because many of the people who criticize Mr. Duterte and Marcos Jr. online, even those with hardly any following or who happen merely to post a comment on a news story or on social media, receive the same scorched-earth treatment: attacked on looks, threatened with death or rape, demonized as coddlers of drug lords and pushers.

Laurio’s most personal post, and certainly her most consequential, was the one where she shed her anonymity.

She has since referred to that piece as the most important of the 850 posts she wrote in 2017, “kasi hindi na ako takot (because I was no longer afraid).”

Aside from the sense of liberation she must have felt upon fully revealing her identity, she also drew inspiration from the many supporters who subscribed to her blog or who shared her posts. The Oct. 13 post carries the following acknowledgment of the voices Laurio knew she had come to represent. It reads like a personal credo—and a political statement.

“Jover Laurio may be only one person, but there are many PABs.

“You can find PAB in every Filipino fed up with the fake news and lies peddled by propagandists.

“You can find PAB in every mother who has lost a child to an EJK.

“You can find PAB in the cries of children orphaned because their parents were killed without due process.

“You can find PAB in every worker wrestling with traffic every day, a problem which up to now the government has still not solved.

“You can find PAB in every teacher who receives a meager chalk allowance from the government.

“You can find PAB in the soldiers who defend our territory in the West Philippine Sea while Cayetano and President Duterte fail to fight for it.

“You can find PAB in every OFW who toils in another country but comes home weeping because the corpse of a loved one is waiting.

“You can find PAB in every taxpayer almost doubled over from paying taxes that the government wastes on propagandists on multiple junkets.

“You can find PAB in the people who hoped for decent change but are frustrated because violent change is what is happening.”

These are the voices fighting fake news.