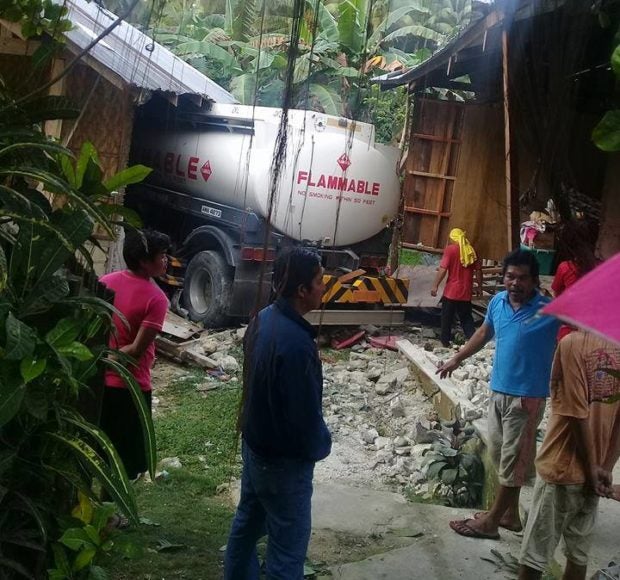 PO1 Eric Madanguit of Balilihan Police Station, said the driver, Wendel Buaya Alcayde, 22,  a resident of Barangay Obujan in Sagbayan town,  was heading towards Tagbilaran City from Tubigon town, when the brakes malfunctioned as it was traversing a winding  road around 3 a.m. in Barangay Haguilanan.

As a result, the truck rammed two houses owned by Ricardo Orilla, 59, and his mother Victoria Orilla.

Glicerio Canabe, 50, a neighbor of the Orilla family, said Ricardo’s youngest daughter KenKen were rushed to a hospital after they suffered minor bruises in the feet. They were later released from the hospital.

Canabe said KenKen suffered bruises on her legs and waist.

“Naay trauma ang bata … kay naigo … natabunan og kahoy kay natug pa man (A piece of wood fell unto her and she was in trauma since the incident happened suddenly while she was sleeping),” said Canabe.

Victoria had also a foot injury when she went outside her house to check. Since, it was dark and there were scattered hollow blocks, she lost her balance.

They were advised to have a medical check-up at Catigbian District Hospital.

With the front portions of the houses severely damaged by the out-of-control vehicle, neighbors and bystanders were awed.

Ace Jess Ejoc, 31, a resident of Haguilanan, Catigbian, who saw the houses, said it was a miracle they survived the incident.

“Nakatulo jud ako luha sa milagro sa Ginoo (It was a miracle from God that no one died),” she said.

Madanguit said the oil tanker did not turn to its side and spill its contents.

Madanguit said damage to Ricardo’s house was placed at P400,000, while Victoria’s house incurred a damage worth P200,000.