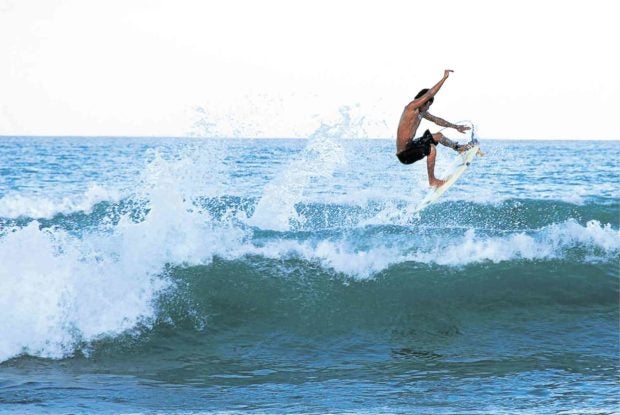 A surfer braves the waves of the Pacific Ocean at Baler town in Aurora province. —INQUIRER FILE PHOTO

SAN JUAN, LA UNION—This second class municipality about 282 kilometers north of Metro Manila is to be declared the “surfing capital of Northern Luzon,” according to a measure passed by the House of Representatives, but its impact on the town’s ecology now concerns some business leaders and environmental groups.

House Bill No. 6683 was approved on third and final reading on Dec. 11 and was transmitted to the Senate for its concurrence on Dec. 12.

The measure directs the Department of Tourism (DOT), in coordination with other government agencies, to prepare a tourism development plan within a year after the bill is enacted into law.

It also directs the DOT to allocate P100 million annually to implement the plan that would include “the construction, installation and maintenance of facilities and infrastructure that shall develop and promote the beaches and surfing activities of the province.”

The measure does not provide details as to how many surfers are drawn annually to the town’s beaches to ride the waves that occur from July to October, and November to March, citing only thousands of repeat visitors.

“My only concern is the regulatory measure. When you expect people to come, you should also expect more garbage, traffic and so on … That would eventually destroy the environment,” said Dulay, a San Juan resort owner.

While other tourism stakeholders in San Juan may have been involved in the bill’s drafting, Dulay said he, as a private sector representative on tourism in the Ilocos regional development council, was not aware of the measure.

San Juan officials welcomed the measure should it become law. But they said they were also concerned about the impact of increased tourism on the town’s marine wildlife.