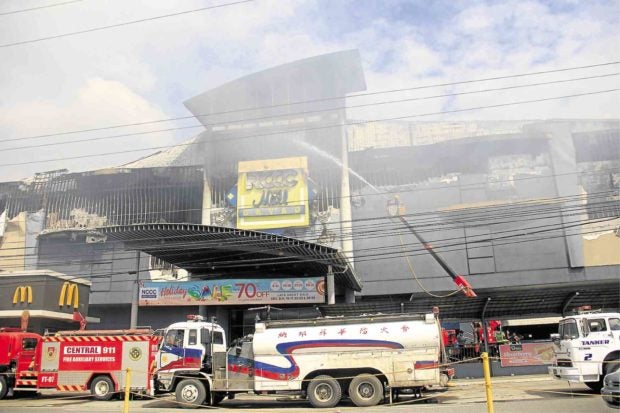 Lawmakers will call for an inquiry this month into a recent fire that hit the New City Commercial Center (NCCC) shopping mall in Davao City and killed 38 people, 37 of whom worked at a call center for an American firm, Gabriela party-list Rep. Arlene Brosas said on Friday.

The Dec. 23 blaze broke out on the third level of the mall before its choking smoke engulfed the offices of the company, Survey Sampling International (SSI), a floor above.

Supt. Honey Fritz Alagano, the Davao City fire chief, and four members of the fire department who had inspected the mall and issued permits for its operation, had been relieved of duties and are facing investigation.

Authorities officially ended their search and retrieval operations inside the NCCC mall on Friday after the body of the last missing SSI employee was found and identified.

Initial checks by the Bureau of Fire Protection revealed signs of fire-safety lapses that may have contributed to the tragedy, since there were problems with “exits, sprinkler systems and alarm systems.”

“We are filing a resolution as soon as the session starts. We will call anew for the passage of the Occupational Safety and Health Standards (bill),” Brosas said in a news conference.

The House of Representatives will resume session on Jan. 15.

The left-wing Makabayan bloc will also seek to ensure the accountability of the Philippine Economic Zone Authority, the Department of Labor and Employment, the Davao City government and companies involved, Brosas said.

A security officer of NCCC Mall was among the 38 killed in the fire, which injured six people, although about 100 call center employees survived.

SSI has declined to comment on the issue of fire safety at its Davao offices until the investigation is complete.

Earlier, the city government announced that all 38 missing victims had been found but later issued a retraction, saying the body of SSI employee Alexandra Moreno was still unaccounted for.

Senior Supt. Jerry Candido, the spokesperson for the task force looking into the 32-hour fire, said Moreno’s charred remains were found at 7 p.m. on Thursday near the gutted lobby of SSI.

Candido said Moreno’s remains and a bag containing her personal belongings, including a keychain with a car replica attached to it, had been recovered.

“(Moreno’s) mother on Friday personally identified the keychain as that of her missing daughter’s,” the fire official said.

Candido maintained that there were safety lapses both on the part of the BPO firm and the mall management. He said the US firm’s fire door was not an ideal exit as it was made of concrete and glass.

The call center’s alarm system was also not connected to the mall’s, so it did not went off when the blaze started at the lower floor of the building, he said. —REPORTS FROM FRINSTON LIM