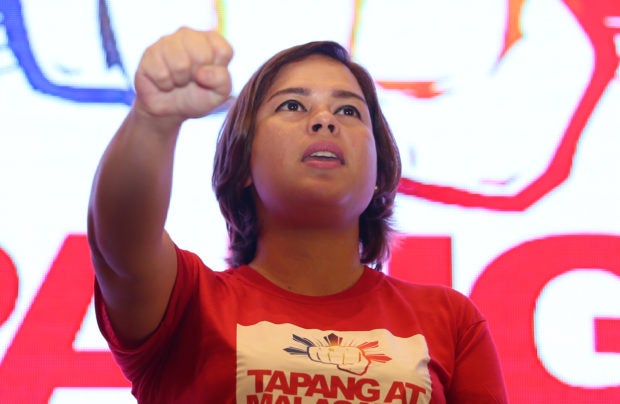 DAVAO CITY—President Duterte’s daughter Sara on Thursday warned his political enemies not to irritate her to the point where she might be pushed to run for senator.

Sara Duterte, who is the mayor of Davao City, made the remarks following a report about a Social Weather Stations (SWS) survey showing that she placed ninth among the top 12 potential contenders in the 2019 congressional election.

“Just don’t let the enemies of PRD (President Rodrigo Duterte) annoy me, then my slot should become available to all the yellows,” she said, referring to the members of the opposition Liberal Party, who are among the critics of her father.

Being included in a list of potential senatorial candidates was “not new to me,” she said, adding that she was also on a survey list in 2012.

“Thank you to those who gave their support, but I still believe that being a responsible Davaoeño, whether in public office or as a practicing lawyer, is my contribution to nation building,” the mayor said.

“If Davao City is strong, then that is the Davaoeños’ patriotism at work,” she said.

The President’s feisty 39-year-old daughter, who is also called Inday Sara, had quashed rumors that she wanted to run for senator, saying she was instead interested in taking over the post of Davao City Rep. Karlo Alexei Nograles.

Mr. Duterte has spoken highly of his daughter—a lawyer like him and a mother of three—and had joked that she could succeed him as President after he steps down in 2022.

Sara served as vice mayor of Davao City from 2007 to 2010 when her father was mayor. They switched positions in 2010 and Sara was elected as the city’s first female and youngest mayor.

She again won as mayor in May elections in 2016, with her eldest brother, Paolo, winning as vice mayor.

Her husband, Manases Carpio—a nephew of Ombudsman Conchita Carpio Morales—was linked to the “Davao Group” allegedly involved in the smuggling last year of P6.4 billion worth of “shabu” (crystal meth). He has vehemently denied any involvement in drug trafficking.

The Dec. 8-16 SWS survey, which was published by Rappler.com, showed Sara Duterte behind the son of the late dictator Ferdinand Marcos, defeated vice presidential candidate Ferdinand “Bongbong” Marcos Jr., and ahead of former Sen. Lito Lapid.

Reelectionists and former senators dominated the top 12 senatorial candidates, according to the survey.

Former Sen. Jinggoy Estrada, who was freed last year from detention on charges of plunder linked to the P10-billion pork barrel scam, was in seventh spot, while his half-brother, Sen. JV Ejercito, placed 11th, ahead of 12th-placer radio-TV journalist Erwin Tulfo. —WITH A REPORT FROM INQUIRER RESEARCH

Read Next
Cloudy, drizzly Friday for PH – Pagasa
EDITORS' PICK
Look Through: Super Typhoon Karding barrels through parts of Philippines
Motorcycles, smartphones, and cash prizes up for grabs in TNT’s ‘Tuloy Ang Saya’ Raffle in Mindanao
Do all the things you do, faster
POGOs not linked to Illegal online gaming, says Pagcor
House energy committee chair Arroyo bats for cheap electricity
Metro Manila now at moderate risk for COVID-19 — DOH
MOST READ
Robredo supporter tackles elephant in room: No massive fraud in 2022 polls, surveys were just right
Comelec invalidates win of sitting governor in Negros Oriental
DepEd: We are in a crisis situation in education sector
Lives destroyed as armyworms invade Philippine ‘onion capital’
Don't miss out on the latest news and information.