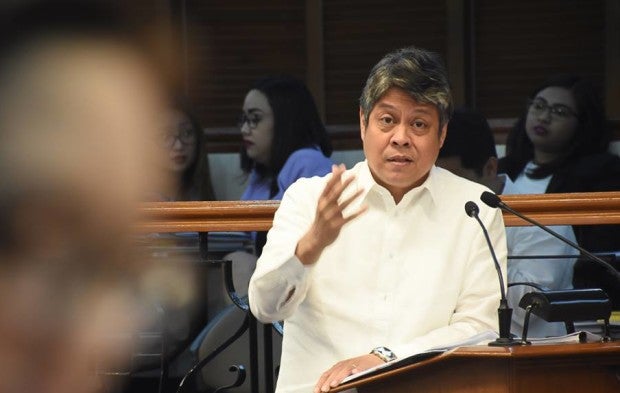 The term of President Duterte and those of members of Congress are to be extended under a 10-year transition once the country shifts to a federal form of government, opposition Sen. Francis Pangilinan said on Thursday.

Pangilinan, president of the Liberal Party (LP), said term extension was among the “proposals we gathered being presented by the ruling PDP-Laban and members of the House of Representatives aligned with the administration.”

In a text message, Pangilinan said the term of the President and those of congressmen and senators would be extended as “no elections” (No-el) would be held in 2019.

His remarks came after both Pimentel and Speaker Pantaleon Alvarez raised on Wednesday the possibility of extending the terms of Mr. Duterte or lawmakers if Congress succeeded in pushing for Charter change (Cha-cha) this year that would pave the way for a shift to federalism.

Proponents of federalism said a transition was needed to prepare for the change in the structure of government, such as creating states.

Pangilinan listed in a statement other possible amendments to the 1987 Constitution being “whispered about” in Congress.

All local officials will be appointed because there will be no elections next year.

Mr. Duterte will be given the power to make laws like Amendment No. 6 during the time of the dictator Ferdinand Marcos while the federal government is not yet established.

Restrictions on foreigners’ exploitation of the country’s natural resources will be lifted so there will be no obstacles for China to come in and infuse billions of pesos in loans and businesses.

“Are these NBN-ZTE, Northrail scandals Part 2?” Pangilinan asked, referring to corruption allegations that hounded the administration of former President Gloria Macapagal-Arroyo in connection with national broadband and railways projects offered by China then.

self-serving efforts by certain groups to perpetuate themselves in power under the guise of a shift to a federal system of governance,” he said in the text message.

Pimentel did not want to comment on Pangilinan’s statements, saying he was

too busy and that his time would be wasted.

“Since no proposal has been set in stone, each one’s free to air his ideas,” Pimentel said.

Like Sen. Panfilo Lacson, Senate President Pro Tempore Ralph Recto voiced doubts that Congress would be able to revise the Constitution in a few months.

“For starters, I have not read any details on federalism, etc.,” Recto said, adding that he expected the elections to push through next year.

Sen. JV Ejercito also expressed doubts Filipinos would accept the scrapping of elections in 2019. “People look forward to elections, which serve as a referendum on all elected officials,” he said.

In a statement, Sen. Bam Aquino defended the holding of elections in 2019, which he likened to “an auditing of the first three years of the current administration and currently elected officials, whether campaign promises are fulfilled or not.”

Aquino said extending the stay in office of politicians would be “self-serving to incumbent officials whose term will end in 2019.”

Lacson has a different take on Pimentel and Alvarez’s move to float the term extension and No-el scenarios.

“The opposition need not invent the best antidote to Charter change. No less than the two leaders of both houses of Congress have started campaigning against it, albeit

subliminally,” he said in a statement.

He said this was because recent history showed that floating these scenarios “won’t help their advocacy to shift to a federal form of government, inevitably via an amendment to the Constitution.”

Pimentel said Lacson had a “point.”

The Senate President said Alvarez should explain well the No-el scenario as this was the Speaker’s view and not his.

Pimentel agreed with presidential spokesperson Harry Roque that any term extension for the President was out of the question.