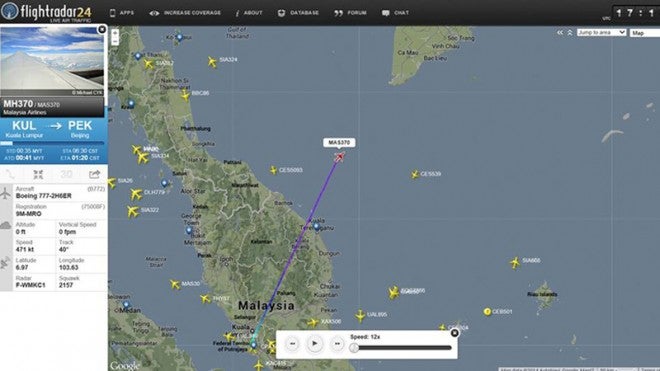 This screengrab from flightradar24.com shows the last reported position of Malaysian Airlines flight MH370 on the night of March 7, 2014. The Malaysian military has radar data showing the missing Boeing 777 jetliner changed course and made it to the Malacca Strait, hundreds of kilometers from the last position recorded by civilian authorities, according to a senior military official. (AP PHOTO/FLIGHTRADAR24.COM)

JOHANNESBURG – A United States-based company has dispatched a ship into the Indian Ocean in hopes of quickly resuming the search for the missing Malaysia Airlines Flight 370 if it soon secures a contract to do the job.

The search vessel named Seabed Constructor left the South African port of Durban on Tuesday as part of the Ocean Infinity company’s plan to look for debris in the southern Indian Ocean. The ship has unmanned submarines that can descend deep into the ocean.

Ocean Infinity was taking advantage of favorable weather to move the vessel toward “the vicinity of the possible search zone,” the company said in a statement.

“This is designed to save time should the contract award be forthcoming, as hoped,” it said. “We will confirm as and when the contract is awarded and the search can resume,” it added.

The Malaysian government is negotiating with Ocean Infinity and will make an announcement next week, Transport Minister Liow Tiong Lai said on Wednesday.

The Malaysia Airlines Boeing 777 disappeared soon into its flight from Kuala Lumpur to Beijing on March 8, 2014. The plane was carrying 227 passengers and 12 crew members.

The governments of Malaysia, China, and Australia called off the 1,046-day official search on January 17, 2017. The Australian Transport Safety Bureau’s final report on the search conceded that authorities were no closer to knowing the reasons for the plane’s disappearance, or its exact location.

Australia ran the original search on behalf of Malaysia because the airliner is thought to have crashed in the vast area of Australian search and rescue responsibility.

New Australian Transport Minister Barnaby Joyce told Australian Broadcasting Corp. on Thursday that the decision on whether to resume the search was Malaysia’s call.

“I can understand how Malaysians are incredibly driven by finding the wreckage,” said Joyce, who became transport minister two weeks ago.

“I have, to be quite frank, some concerns as to whether it will be found,” he added.