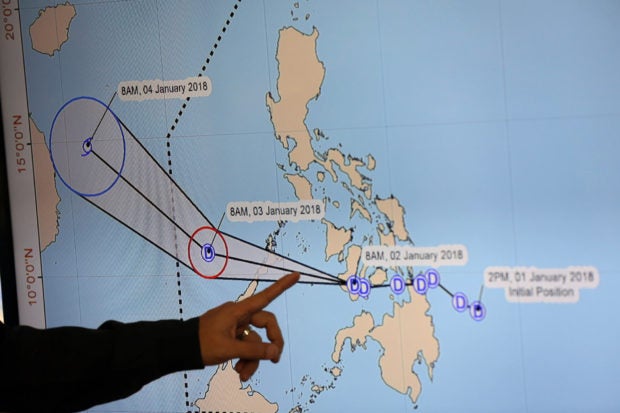 Still reeling from deadly back-to-back storms over the past two weeks, the Visayas and Mindanao once again faced heavy rains on Tuesday, this time dumped by Tropical Depression “Agaton,” triggering landslides and flooding that claimed the lives of at least three people.

Agaton also displaced thousands  and knocked out the electricity  in Negros Oriental and Aklan provinces and parts of Cebu province.

A number of flights were canceled at Ninoy Aquino International Airport due to bad weather.

In Cebu province, an elderly woman was killed in a landslide while a man died after he fell and hit his head on the pavement as Agaton knocked out the electricity.

A 17-year-old girl drowned at a beach resort in Isabela City,  Basilan province, around 11:45 a.m. on New Year’s Day due to storm surges.

“There were huge waves and strong current. It was abnormal on Jan. 1 and we considered it Agaton-related,” said Jamju Rivera, the city disaster risk reduction and management officer.

Landslides were reported at San Fernando, Romblon province, Alegria and Ginatilan towns in Cebu province, and in Iligan City.

A number of towns in Cebu, Eastern Samar, Biliran, Leyte and Bohol provinces were flooded.

No rest since Christmas

Agaton was poised to hit Palawan province with gusts of 65 kilometers per hour later on Tuesday night. It was expected to cross Sulu Sea, moving west at 28 kph, with its next landfall in the evening in the vicinity of Puerto Princesa City, according to the weather bureau.

Storm Signal No. 1 was hoisted in the province, including Cuyo Island.

“The residents are really sad. It is tough that we have three storms coming one after another. People have lost their livelihood and have had no rest since Christmas,” Palawan information officer Gil Acosta told Agence France-Presse (AFP).

Palawan accounted for 37 of the recorded deaths from Urduja, with 60 other people still missing, Acosta said.

More than 3,000 people were stranded at ports in Northern Mindanao, Eastern Visayas and Central Visayas. Once a tropical storm warning signal is hoisted over an area, sea travel is automatically suspended by the Coast Guard.

Flora Basadre, 64, was sleeping inside her house at Barangay Looc, Malabuyoc town, Cebu province, when it was hit by a mound of earth that cascaded from the mountains about 4 a.m. on Tuesday, said Julius Regner of the Provincial Disaster Risk Reduction and Management Office.

A 39-year-old man died of head injury when he jumped off the window after waking up without the lights on. “His neighbors were shouting at him that there was a brownout [but he didn’t hear them],” Regner said.

In Iligan City, rescuers fished out of the water Anifa Maulod, 17. She died on the way to hospital.

At least 3,583 travelers were stranded after the Coast Guard barred 23 vessels from sailing in Eastern Visayas.

Also affected were 129 buses and cargo trucks headed to Luzon and Mindanao from the ports of Southern Leyte, Leyte and Northern Samar, according to the Coast Guard.

Hundreds of travelers who flocked to the City of Calapan’s port to return to work  and school in Metro Manila were stranded on Tuesday after fast ferries Oceanjet and Supercat suspended their trips.

More than 250 people were evacuated from flooded areas in Biliran, Eastern Samar and Leyte.

Scores of families also moved to safe places at the towns of Palo and Tanauan, both in Leyte province, and in Romblon and Palawan, and at least 55 families at Jipapad town in Eastern Samar.

In Bohol, 25 families left their homes about 10 a.m. on Monday after Loboc River overflowed. They took shelter at Camaya-an High School.

By Tuesday morning, water level at the town’s Poblacion Ondol was waist-deep, rendering the streets impassable to vehicles.

Some houses at Barangays Villaflor and Jimilian were flooded.