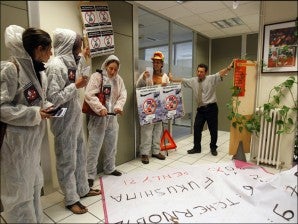 A bank employee stands next to anti-G8 protesters as they occupy a bank during a demonstration in the city of Le Havre, western France, Thursday, May 26 claiming that banks finance nuclear weapons and energy. G8 leaders, in a two-day meeting in Deauville, will discuss the Internet, aid for North African states and ways in which to end the conflict in Libya. (AP Photo/Francois Mori)

PARIS — Police on Thursday detained some 100 people protesting against the Group of Eight summit in a Normandy ressort.

Officers also prevented protests in Paris and other French cities aimed to coincide with the two-day summit that brings together leaders of the world’s richest nations at the northern resort town of Deauville.

Some of the demonstrators were searched with their hands against a wall before being led into police vans.

A smaller group of around a dozen protesters managed to get inside the Paris offices of credit rating agency Standard & Poors, but left peacefully after handing out pamphlets.

Closer to the summit, a group of activists raised a large banner with anti-G8 slogans on the beach in Le Havre, just across the mouth of the Seine river from Deauville.

In nearby Caen another small demonstration of around several hundred protesters was contained by police.