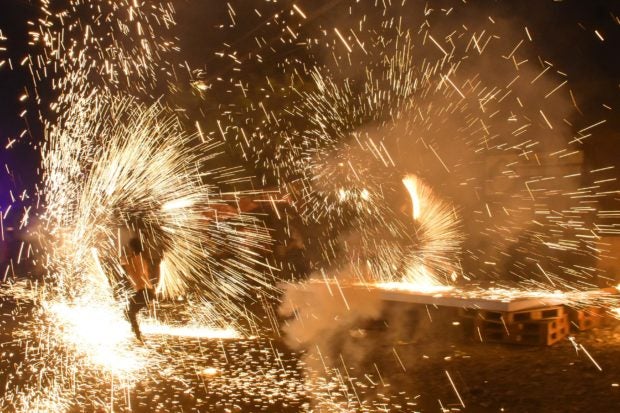 A fire dancer performs with pyrotechnics on New Year’s Eve in the village of Malued in Dagupan City. Six hundred eighty (680) fountains placed in a 2.5 km stretch of the village was lighted just before midnight. PHOTO BY WILLIE LOMIBAO

The Department of Health (DOH), however, reported a much lower figure, counting only 191 injuries not just on New Year’s Eve but from Dec. 21 to Jan. 1, the entire monitoring

Health Secretary Francisco Duque III told a news conference on Monday that the DOH was “relatively pleased” at the 68 percent decline in injuries.

“Relatively because there are still injuries reported, but pleased because of the substantial reduction,” Duque said.

Duque attributed the decrease on President Duterte’s Executive Order (EO) No. 28, which limited the use of firecrackers to places designated by local governments and required police permit.

“The government campaign against firecrackers has reduced the number of injuries. The passing of EO 28 reinforced the efforts of the DOH,” Duque said.

He said the DOH was considering recommending to Mr. Duterte an “absolute ban” on firecrackers, which should lead to “zero casualty.”

“We proved that, while there was a very drastic cut in firecrackers this New Year, the people still had a joyous celebration,” presidential spokesperson Harry Roque said.

Not ready to give up tradition

The Philippine National Police tried to enforce EO 28 on New Year’s Eve, but Filipinos were not ready to give up their tradition, acquired from the Chinese, of welcoming the new year with the loudest noise they could make—with fireworks.

In Caloocan City, police used bullhorns from cruisers to warn people against playing with firecrackers.

But as soon as the cruisers were gone, people returned to the streets and set off bangers.

At 11:45 p.m., revelers let go, setting off “five stars,” “triangulo,” whistle bombs, “Judas’ belts” and “sawa” and launching all kinds of flying fireworks that illuminated the sky but also veiled the environment in thick smoke.

Police and regional offices of the DOH reported 373 people injured in the revelry across the country.

Government doctors said 193 were hurt in the celebrations in Central Luzon, Ilocos and Cordillera regions.

Of 92 blast victims in four Ilocos provinces, more than half were minors, according to Supt. Ferdinand de Asis, regional police information officer.

Sixty-five cases were in Pangasinan, 16 in La Union, three in Ilocos Sur and eight in Ilocos Norte.

In Central Luzon, 85 people were injured in firecracker blasts. Most of them underwent minor amputations in hospitals in the region.

In Cordillera, 16 people, including an 8-year-old boy, were treated in hospitals for blast injuries.

At least 107 people were injured in firecracker blasts in Southern Luzon.

In Calabarzon (Cavite, Laguna, Batangas, Rizal and Quezon), police said 58 people were injured, including a 5-year-old girl at Maragondon in Cavite province.

In Batangas, police arrested Jeremy Latayan in Tanauan City for firing his gun.

Supt. Chitadel Gaoiran, spokesperson for the regional police, reported on Monday that there were injuries from celebratory gunfire in the province.

Reports from various provincial police offices showed that Laguna and Rizal provinces had the most firecracker injuries, with 26 victims from each province.

In Bicol region, the DOH regional office reported 49 firecracker injuries, most of them children.

In the Visayas, the DOH regional office and the PNP reported 69 firecracker injuries.

A woman was injured by a stray bullet in Aklan province.

Citing DOH data, the PNP in the Visayas reported 36 firecracker injuries, including 29 in Cebu, four in Bohol and three in Negros Oriental.

In Western Visayas, 24 people were injured, including 14 in Negros Occidental, six in Iloilo, three in Aklan, and two each in Capiz and Guimaras.