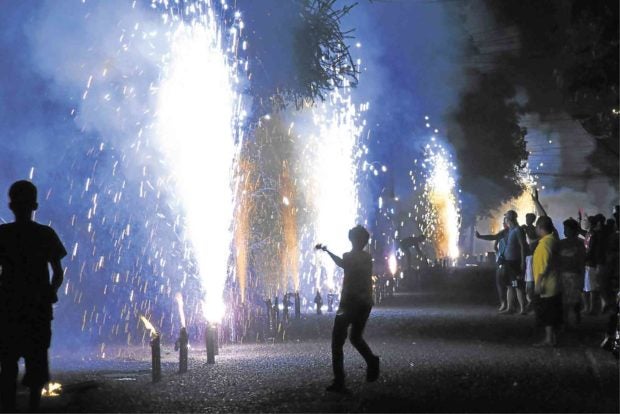 Twenty-five people celebrating the New Year were wounded after a defective flying firework failed to launch and instead exploded on the ground in Dagupan City, Pangasinan on Monday.

The victims sustained wounds in different parts of their body after lighting up what appeared to be a faulty firework, Radyo Inquirer reported.

Instead of shooting up high in the air, the firework remained stationary on the ground after being lit.

The firework then exploded while still on the ground, catching a lot of revelers by surprise.

Children watching the display were also injured by the shower of sparks.

The victims were later discharged from the hospital after undergoing first aid. with a report from Len Montaño/Radyo Inquirer /jpv

Read Next
De Lima celebrates New Year in detention; asks prayer for victims of injustices
EDITORS' PICK
Look Through: Super Typhoon Karding barrels through parts of Philippines
Motorcycles, smartphones, and cash prizes up for grabs in TNT’s ‘Tuloy Ang Saya’ Raffle in Mindanao
Do all the things you do, faster
POGOs not linked to Illegal online gaming, says Pagcor
House energy committee chair Arroyo bats for cheap electricity
Metro Manila now at moderate risk for COVID-19 — DOH
MOST READ
Robredo supporter tackles elephant in room: No massive fraud in 2022 polls, surveys were just right
Comelec invalidates win of sitting governor in Negros Oriental
DepEd: We are in a crisis situation in education sector
Lives destroyed as armyworms invade Philippine ‘onion capital’
Don't miss out on the latest news and information.