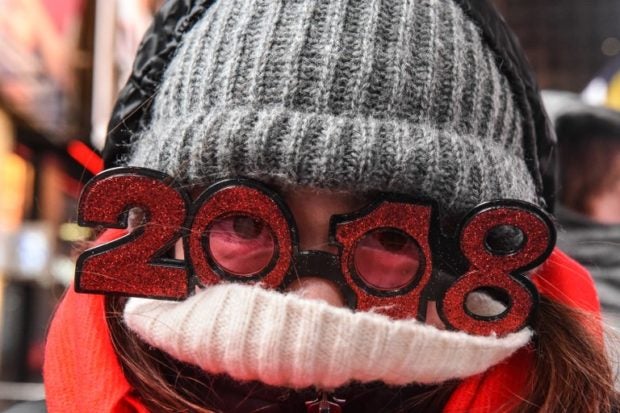 A reveler wears 2018 glasses in Times Square ahead of the New Year’s Eve celebration on December 31, 2017 in New York City. AFP

With most dressed in thick coats and snow gear, New Yorkers and tourists faced a night tipped to be the coldest since 1962 — with temperatures of 14 F (-10 C) that felt like 4 F with the wind chill.

Forecasters warned it would get even colder at midnight.

After two Islamic State group-inspired terrorist attacks in the city, in December and October, security was tightened with more than 20 roads closed. Barricades and sand-filled trucks are in place, along with bomb-sniffing dogs and more officers on the ground.

Police also carried out two rounds of security screening on each person who entered the Times Square security perimeter, which is the largest in history.

Entering the secured area, revelers emptied and discarded their wallets and even small bags, which were not allowed.

After a mass shooter in October killed 58 people in Las Vegas when he fired into a crowd from his hotel room, New York police also deployed personnel to hotels and restaurants for the first time.

“This is like the most exciting day in my life. I am very committed (to facing the cold),” said Hader Ghulam, 27, a Pakistani student based in Oklahoma and visiting New York for the first time.

He told AFP he was impressed by the city’s security measures and felt “pretty safe.”

Amber Gerrits, a student from Michigan, said she wasn’t worried.

“I think it’ll be all right,” she said, adding that “a lot of layers” of clothing helped prepare for temperatures which the National Weather Service warned were “dangerously cold.”

“And we plan on not drinking too much water,” the 21-year-old said, referring to the difficulties of finding a public bathroom among the huge crowds.

The celebrations in Times Square will feature music performances, fireworks, 3,000 pounds (1,360 kilograms) of confetti and 25,000 balloons.

Mayor Bill de Blasio and this year’s special guest, activist Tarana Burke — leader of the #MeToo movement against sexual harassment — will press a button seconds before the clock strikes midnight in a tradition that sends a ball down a pole to signal the New Year.

Some of the celebrities joining the party are Mariah Carey — whose performance last year was plagued with technical problems — Neil Diamond, Nick Jonas and Camila Cabello. /cbb

Read Next
5 Colorado deputies shot, 1 fatally, in ‘ambush’
EDITORS' PICK
Look Through: The fate of impounded stray dogs
House energy committee chair Arroyo bats for cheap electricity
What to watch out for when selecting a video surveillance solution
23,000 cops to be deployed nationwide for school reopening
Unleash the photographer in you this World Photography Day with vivo smartphones
DOH says COVID-19 cases plateauing, but public shouldn’t be ‘complacent’
MOST READ
Korina Sanchez reunites with former ABS-CBN co-anchors Julius Babao, Cheryl Cosim
Sharon Cuneta asks for prayers for friend in ICU who suffered silent stroke
QC school’s shutdown violated rules – CHEd
Light therapy could be the answer to your sleep problems
Don't miss out on the latest news and information.