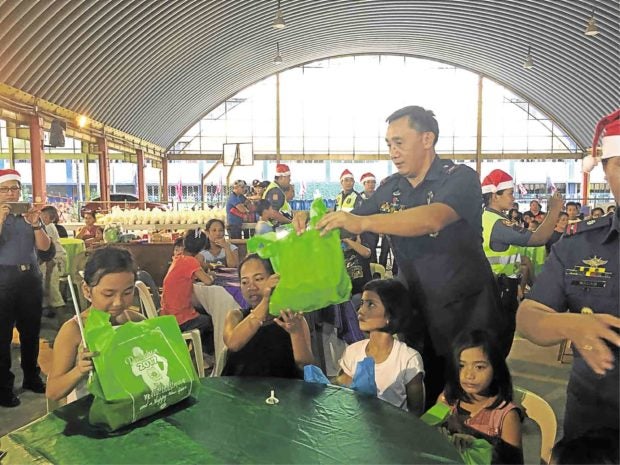 To close a year marked by controversies over the way some officers had waged the war on drugs, the Caloocan City police played Santa Claus to the children of drug surrenderers, hoping to impress upon everyone that they are “not their enemies.”

But while grateful for the merriment and gift-giving, some of the former drug dependents expressed hope that the new year would really be a peaceful one for them and their families—or that they would not be wrongly tagged as “suspects” in future antidrug operations.

“We’re happy that they’re reaching out to us,” said Luckie Gaborni, a former drug user and now a “graduate” of the city government’s community-based rehabilitation program. “But we wish that, like us, the police have also changed their ways.”

On Saturday, around 400 families were gathered at Caloocan High School auditorium to receive food items and toys from ranking officials of the Philippine National Police.

Empiso said the program was intended to show drug users and their families that “we are not their enemies. We are trying to reach out to them and are here to help in any way we can.”

Modequillo added: “We are keen on giving them a second chance. We want them to know that they need not fear [us].”

The image of the Caloocan police took a beating this year as some of its officers got involved in questionable antidrug or anticrime operations, especially those that ended in the death of teenagers Kian delos Santos and Carl Arnaiz in August.

As public outrage grew over the killings, the city’s law enforcers were ordered replaced en masse the following month.

In an interview during Saturday’s gathering, Monalisa Siticson cited those controversial drug killings as the main reason why she voluntarily entered the city’s rehab program.

The mother of eight said she didn’t want to be “ma-Tokhang”—the street lingo that emerged to describe the fate of drug users or smalltime pushers who, after surrendering to the PNP under the Oplan Tokhang campaign, were still killed by the police allegedly because they didn’t stop their illegal activities.

Siticson emerged from the program apparently with her fears diminished. “Before, we were really scared of the police. But now that we have undergone rehab, we feel confident and safe that they now consider us reformed.”

Gaborni, one of Siticson’s batch mates in the program under the auspices at the Our Lady of Lujan Parish in Barangay Bagong Barrio, hoped that the police would be more “hands-on” in the rehabilitation process.

“I’m sure that if (policemen) immerse themselves more in the process of rehabilitating drug users, they would appreciate the struggle and challenges we face,” Gaborni said. “That way, they could have a better grasp of what we are going through and it’s easier for them to sympathize.”