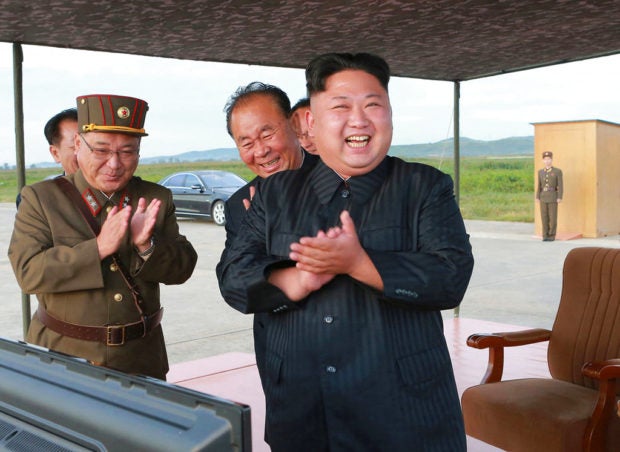 FILE – In this undated file photo distributed on Sept. 16, 2017, by the North Korean government, North Korean leader Kim Jong Un, right, celebrates what was said to be the test launch of an intermediate range Hwasong-12 missile at an undisclosed location in North Korea. North Korea says it will never give up its nuclear weapons as long as the United States and its allies continue their “blackmail and war drills” at its doorstep. Independent journalists were not given access to cover the event depicted in this image distributed by the North Korean government. The content of this image is as provided and cannot be independently verified. (Korean Central News Agency/Korea News Service via AP, File)

SEOUL, South Korea — North Korea said Saturday that it will never give up its nuclear weapons as long as the United States and its allies continue their “blackmail and war drills” at its doorstep.

North Korea conducted its most powerful nuclear test to date in September and launched three intercontinental ballistic missiles into the sea in July and November, indicating that it is closer than ever to gaining a nuclear arsenal that could viably target the mainland United States.

The aggressive tests have led to more international sanctions and pressure on North Korea amid concerns that the window for stopping or rolling back its nuclear program is closing rapidly. The U.S. and South Korea have maintained that they won’t negotiate with the North unless it is willing to discuss curbing its nuclear weapons and missile program.

In its report Saturday, KCNA said North Korea had taken steps for “bolstering the capabilities for self-defense and pre-emptive attacks with nuclear force” in the face of a continued “nuclear threat and blackmail and war drills” by the United States and its “vassal forces.”

The North often lashes out at the annual military drills between the United States and South Korea, which the allies describe as defensive in nature.

“Do not expect any change in its policy. Its entity as an invincible power can neither be undermined nor be stamped out,” KCNA said.

“The DPRK, as a responsible nuclear weapons state, will lead the trend of history to the only road of independence,” it added, referring to North Korea by its official name, the Democratic People’s Republic of Korea.

N. Korea says won’t give up nukes if US keeps up ‘blackmail’