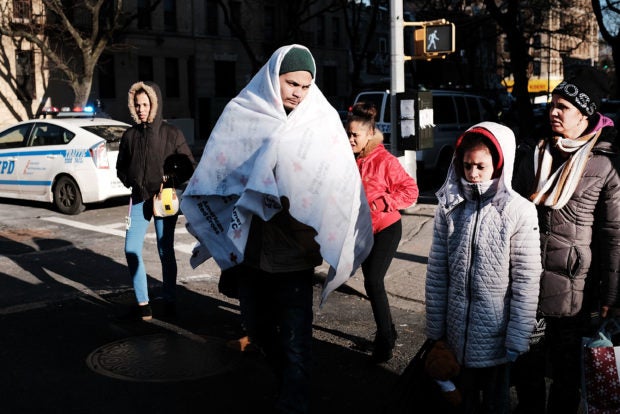 Members of a family who had to evacuate their apartment following a deadly fire walk near the scene the day after in the Bronx on December 29, 2017 in New York City. At least 12 people, including at least four children were killed in the blaze which officials believe was started by a child playing with the stove. AFP

The blaze broke out Thursday evening in a 25-apartment building near the Bronx Zoo, one of the most popular tourist attractions in the US financial capital.

Four people remain in a critical condition following the inferno, which Mayor Bill de Blasio called the “worst fire tragedy we have seen in this city in at least a quarter century.”

“We found that this fire started in a kitchen on the first floor,” fire commissioner Daniel Nigro told reporters.

“It started from a young boy, three-and-a-half years old, playing with the burners on the stove. The fire got started, the mother was not aware of it — she was alerted by the young man screaming.”

The boy’s mother fled with her two children, leaving the door to the apartment open — allowing the flames to shoot up the stairway and quickly spread in the building, as desperate residents fled to fire escapes, seeking rescue.

“The stairway acted like a chimney,” Nigro said. “It took the fire so quickly upstairs that people had very little time to react.”

Firefighters were on the scene in just over three minutes, but for some, it was already too late. Five people died at the scene, and seven others were pronounced dead at local hospitals.

‘It was very tough’

More than 160 firefighters rushed to the scene and worked for about three hours to control the inferno. In the bitter cold, water leaking from the hoses froze on the pavement.

A mother and her two daughters — aged two and seven — as well as a one-year-old girl and an unidentified boy were among the dead, according to police.

Tearful residents said they heard cries of “fire, fire” in the building followed by a mad rush to exit the smoke-filled building.

Many fled into the frigid night with just the clothes on their backs, and authorities called for those who wanted to donate clothes to do so at a local church.

“It was very tough,” said Joel Rodriguez, 40, who escaped from his ground floor apartment through “pitch black” corridors.

“I still have the images in my mind. I can’t erase them,” he added, his eyes masked by dark glasses.

The building — cordoned off with yellow security tape — “is a memorial site now,” he said.

‘We grieve with them’

Two of the dead were discovered in a bathtub full of water, where they had apparently sheltered from the blaze, US media reported.

“This tragedy is, without question, historic in its magnitude,” said Nigro.

“It’s the time of year where people celebrate and certainly here, we have people who have lost their lives, lost their homes, lost everything, and we grieve with them.”

The plaster and brick structure, built in 1916, had six open violations including for a defective smoke detector, The New York Times reported, though De Blasio said there was nothing problematic “as far as we can see.”

Nigro told reporters that investigators were still determining the condition of smoke detectors at the scene.

Following the blaze, the fire department set up stands offering fire prevention information in the city.

It was the second deadly residential blaze in New York, a city of 8.5 million people, in less than two weeks. A mother and three children were killed when a fire tore through their Brooklyn home on December 18.

Thursday’s fire was New York’s deadliest since 87 people were killed in a 1990 inferno at a Bronx social club, The Times said.