Search on for 59 people, mostly fishers, in waters off Mangsee Island
By: Redempto Anda - @inquirerdotnet
Philippine Daily Inquirer / 06:06 AM December 30, 2017 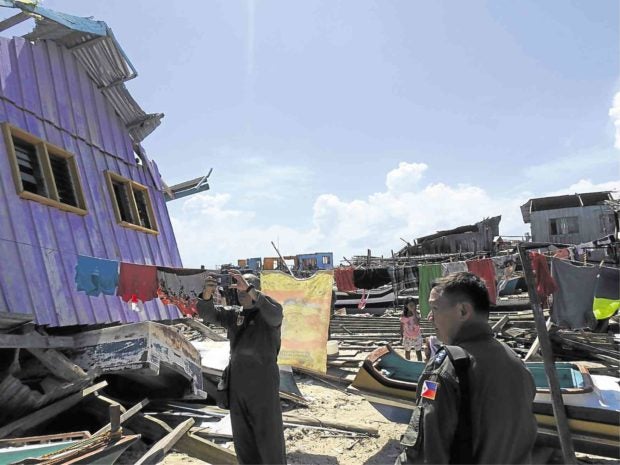 PUERTO PRINCESA CITY— Almost a week had passed since Tropical Storm “Vinta” hit Palawan but local officials said it was only now that they were getting a clearer picture of the devastation that hit the southern section of the province.

Reports reaching the mainland capital on Friday placed the death toll from Vinta on the remote island village of Mangsee off Balabac town at 32. At least 59 others were reported missing.

Vice Gov. Victorino Socrates said search and rescue operations were continuing in the waters off Mangsee.

Socrates said the provincial government was expecting the death toll to increase.

He said a relief vessel was sent to the island, which remained isolated and inaccessible through regular seacraft due to rough conditions at sea.

Socrates said nearly all fatalities reported by the rapid assessment team sent to the area were crew members of fishing vessels that either capsized or were damaged in the high seas around the island when Vinta made landfall there last week.

“Apparently, all of these deaths involved people at sea. They were in the high seas around Mangsee Island when Vinta came. Also, many of [the crew members of] these fishing vessels did not know there was a storm coming,” Socrates said.

Many houses and other structures on the  island, home to more than 8,000 people, were either damaged or destroyed but reports reaching the provincial government indicated that no resident died from the impact of the storm, Socrates said.

Bolosa said many of those who died were Muslim fishermen who remained unidentified as they had to be buried immediately in accordance with Islamic practice.

While the province is busy attending to the needs of storm victims, the Provincial Disaster Risk Reduction and Management Office has also started preparations for another storm, the third to hit Palawan this month.

The Philippine Atmospheric, Geophysical and Astronomical Services Administration (Pagasa) has warned local officials that the weather disturbance, while still categorized as a low pressure area, is expected to transform into a cyclone when it enters the Philippine area of responsibility next week.

The storm, which will be named “Wilma,” is expected to cross Palawan, said Sonny Pajarilla, Pagasa station head here.

“Right now it is still considered a low pressure area but based on the data, it is expected to intensify and might hit the central and upper portions of Palawan,” Pajarilla said.

Socrates said the provincial government had designated evacuation centers in all towns and had prepositioned food and relief items in strategic areas.

In Bicol, heavy rains in the region this week triggered flooding and landslides in nine towns in Camarines Sur province on Thursday, the Office of Civil Defense said.

Albay Gov. Al Francis Bichara on Friday ordered the evacuation of residents in flood and landslide prone areas in the province’s eastern seaboard.