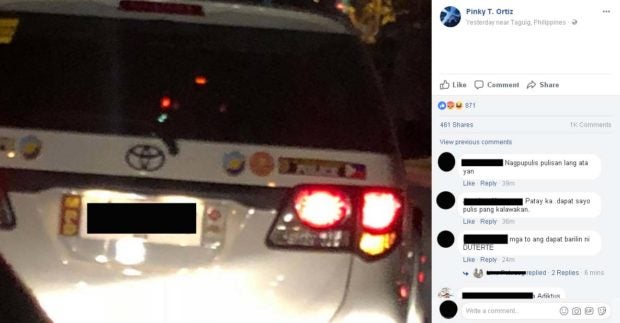 A screengrab of a post by netizen Pinky T. Ortiz on her Facebook account shows the car of the alleged road rage driver that confronted her along the McKinley Parkway inside Bonifacio Global City on Wednesday, Dec. 27, 2017. The picture shows the car displaying a police commemorative license plate and sticker. PHOTO FROM PINKY T. ORTIZ FACEBOOK PAGE

Authorities have identified and located the driver involved in a road rage incident in Bonifacio Global City and who became viral in a social media post, the Taguig City Police said Friday.

In a statement, the Taguig City Police said Bautista had confirmed to them that he was the man who had an altercation with Pinky T. Ortiz on Wednesday about 6 p.m. along McKinley Parkway.

Bautista, who was wearing a Philippine National Police (PNP) athletic shirt during the incident, said he was not a policeman and only wore the uniform because it was “comfortable.”

In a Facebook post that went viral, Ortiz said she was about to cross the street when Bautista honked his horn and turned on his car’s siren. He then overtook and shouted at them, threatening to bring them to the police station for beating the red light, Ortiz claimed.

The police said Bautista denied the accusations hurled against him.

The Taguig City police said they would charge Bautista with “illegal use of uniform” in violation of Article 179 of the Revised Penal Code (RA 3815).

The authorities are trying to contact Ortiz so appropriate case can be filed against Bautista. The PNP is observing “Oplan Tamang Bihis” for the proper wearing of uniforms. It has also authorized exclusive distributors or providers of the uniforms. /cbb