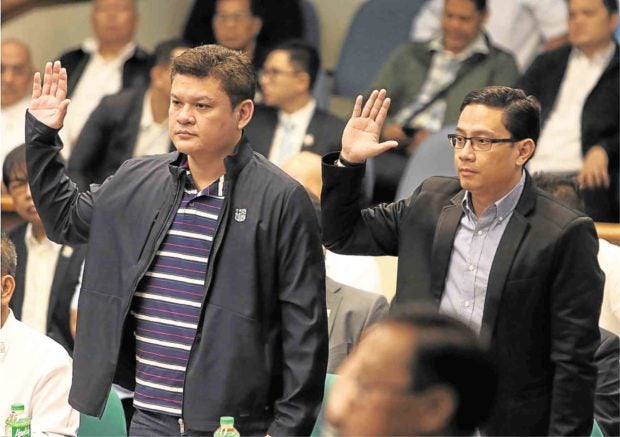 DAVAO CITY — Davao City Vice Mayor Paolo Duterte and his brother-in-law, lawyer Manases Carpio, on Wednesday filed a civil suit against Sen. Antonio Trillanes IV for implicating them in the smuggling into the Philippines of P6.4 billion worth of “shabu” (crystal meth) from China through the Bureau of Customs in May.

Lawyer Kaiser Kate Narciso, clerk of court of Branch 15 of the Regional Trial Court here, confirmed on Thursday that the complaint had been raffled off to her branch of the court.

She said Duterte and Carpio were seeking damages but she could not specifically say how much.

“The case folder is already with Judge Mario Duaves,” she added.

In a statement, Trillanes described the complaint as “nothing but another harassment suit because our corrupt and coopted justice system [has] become the refuge of the Duterte scoundrels.”

Trillanes warned the elder son of President Duterte and Carpio that he would go after them.

“Just be sure that [you’ll] be in power forever because I have made it my life’s mission to make your murderous and corrupt clan accountable for your actions,” Trillanes said.

Narciso said Duaves would conduct a preliminary evaluation of the complaint to determine, among other things, if he had jurisdiction over the case and if there was no ground for dismissal based on substance.

“The merits would not be evaluated yet,” she added.

Narciso said Duterte had separately filed another civil suit for damages against a certain Larry Hermosa.

Sources said Hermosa had been identified as the man who was allegedly maligning Duterte on social media.

Among the staunchest critics of the Duterte administration, Trillanes has publicly accused the Davao City vice mayor of having a hand in the smuggling of 605 kilos of high-grade shabu through the customs bureau on May 23.

The authorities recovered the shabu in a raid on a warehouse in Valenzuela City three days later.

Trillanes also tagged Duterte  as a member of the Chinese organized crime gang Triad, claiming the vice mayor had  dragon tattoo on his back.

Carpio, a lawyer and husband of Davao City Mayor Sara Duterte, was likewise dragged into the controversy for several visits to the customs bureau.

Duterte and Carpio appeared at the Senate inquiry into the drug smuggling in September.

During the hearing, Trillanes dared Duterte to show his supposed dragon tattoo but the vice mayor refused.

Carpio claimed his visits to the customs bureau were in connection with his job as lawyer.

On Christmas Day, Duterte resigned as vice mayor of Davao City, citing as reasons his implication in the drug smuggling  and corruption in the customs bureau and the public spat he had with his daughter Isabelle.

President Duterte has yet to accept his son’s resignation.

The vice mayor is on leave until Dec. 31.

Narciso, the clerk of court, said warrants of arrest would not be issued for Trillanes and Hermosa, but the court would require them to answer the complaints. —With a report from Christine O. Avendaño