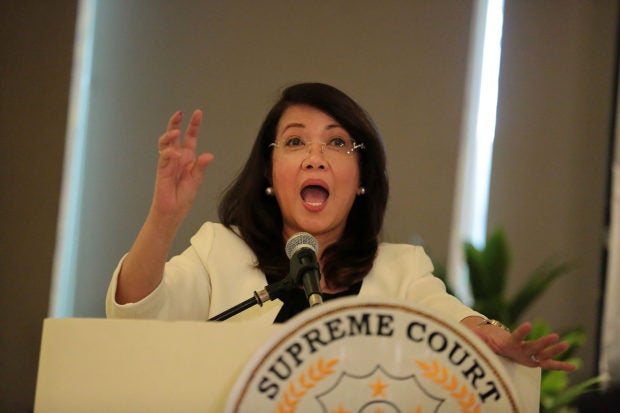 The latest rating is also her lowest net satisfaction rating score since the neutral -1 percent in December 2015.

The drop in Sereno’s rating from September to December follows another drop when her 21 percent rating in June fell 12 points to September’s 9 percent.

It has sampling error margins of plus-minus 3 percent for national percentages and plus-minus 6 percent each for Metro Manila, Balance Luzon, Visayas, and Mindanao.

The 3-point fall in Sereno’s overall net satisfaction rating was a result of the declines of 7 points in Metro Manila, 4 points in Mindanao, and 2 points in the Visayas, combined with a steady score in Balance Luzon.

The Chief Justice’s net satisfaction rating remained moderate in the Visayas, at 12 percent in December 2017, although down by 2 points from 14 in September 2017.

It stayed neutral in Balance Luzon, unchanged at +9 from September to December.

It stayed neutral in Mindanao, at +5 in December, although down by 4 points from +9 in September.

It also stayed neutral in Metro Manila, at -7 in December, although down by 7 points from net zero in September.

Upgrades in Chief Justice Sereno’s net satisfaction ratings from September to December 2017 can be found among 18-24 year olds. /cbb