Brrr! After record snow, bitter cold ahead for northern US 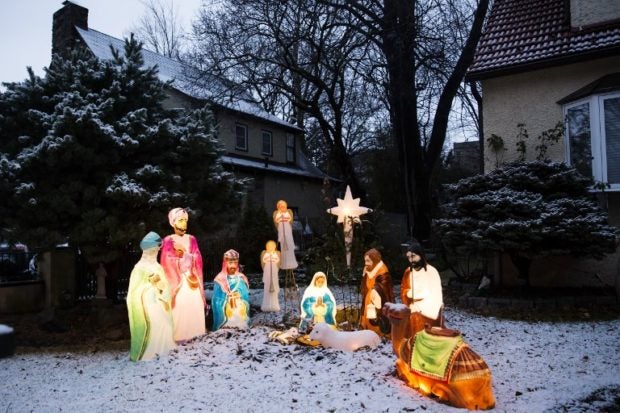 A Christmas Nativity scene is covered with snow at a house on Christmas day on Dec. 25, 2017, in Riverdale the Bronx borough of New York City. AFP

ERIE, Pennsylvania, United States — Freezing temperatures and below-zero wind chills socked much of the northern United States on Wednesday, even setting a record in a Minnesota city so cold it’s called the Icebox of the Nation, and will stay put for days to come as snow-hardened Erie digs out from a record snowfall.

Forecasters warned of hypothermia and frostbite from arctic air settling in over the central U.S. and spreading east.

Wind chill advisories or warnings were in effect for much of New England, northern Pennsylvania and New York. Those places and states in the northern Plains and Great Lakes were projected to see highs in the teens or single digits and lows below zero for the rest of the week and into the new year.

Meanwhile, Erie was recovering from a storm that brought 34 inches of snow on Christmas Day, smashing the daily snowfall record for the Great Lakes city of 8 inches, and 26.5 more inches on Tuesday. More than 65 inches have fallen on the city since Christmas Eve, with several more inches falling Wednesday as residents dug out in frigid temperatures.

Strong westerly winds over Lake Erie picked up moisture, developed into snow and converged with opposing winds, dumping snow in a band along the shore from Ohio to New York, said Zach Sefcovic, a National Weather Service meteorologist in Cleveland.

Sabrina Ram drove into Erie on Christmas Eve to visit her parents just as the snow began to fall. Ram, who lives in suburban Washington, D.C., and her father spent five hours on Christmas and two hours on Tuesday clearing the driveway.

“In D.C., we’d be out of commission for weeks,” Ram said. “Things here are pretty much back to normal now.”

She said she was going to build a snowman but didn’t know where to start — “where do you put it?” — and she went outside to clear off the satellite dish before falling face first into the snow because she couldn’t figure out where the porch ended.

“I totally just flew forward while my dad laughed at me,” Ram said.

In New York, communities near Lake Ontario’s eastern end, including Redfield and Boylston, also saw around 5 feet of snow this week.

The storm’s timing was good, since people were off the streets and staying home for Christmas, giving plows more space to clear streets, officials said.

“We’re used to a lot of snow here in Erie, but this is unprecedented, the amount we got,” Dahlkemper said.

In Millcreek, outside Erie, it took Kathleen Palkovic and her son two hours to shovel out so she could make it to her waitressing job. The 5-mile (8-kilometer) drive to Dave’s Diner in downtown Erie took an hour. Palkovic and the cook opened the restaurant at a little after 6 a.m. in single-digit temperatures.

Something else helped: “It took 800 milligrams of ibuprofen after all that to get me to work.” /cbb

Read Next
Duterte vetoes 4 ‘unconstitutional’ items in 2018 budget
EDITORS' PICK
Look Through: The fate of impounded stray dogs
House energy committee chair Arroyo bats for cheap electricity
What to watch out for when selecting a video surveillance solution
23,000 cops to be deployed nationwide for school reopening
Unleash the photographer in you this World Photography Day with vivo smartphones
DOH says COVID-19 cases plateauing, but public shouldn’t be ‘complacent’
MOST READ
Sharon Cuneta asks for prayers for friend in ICU who suffered silent stroke
Light therapy could be the answer to your sleep problems
Korina Sanchez reunites with former ABS-CBN co-anchors Julius Babao, Cheryl Cosim
PBA: San Miguel ousts Meralco to arrange finals duel vs TNT
Don't miss out on the latest news and information.