That sinking feeling: The story behind Navy chief’s sudden fall 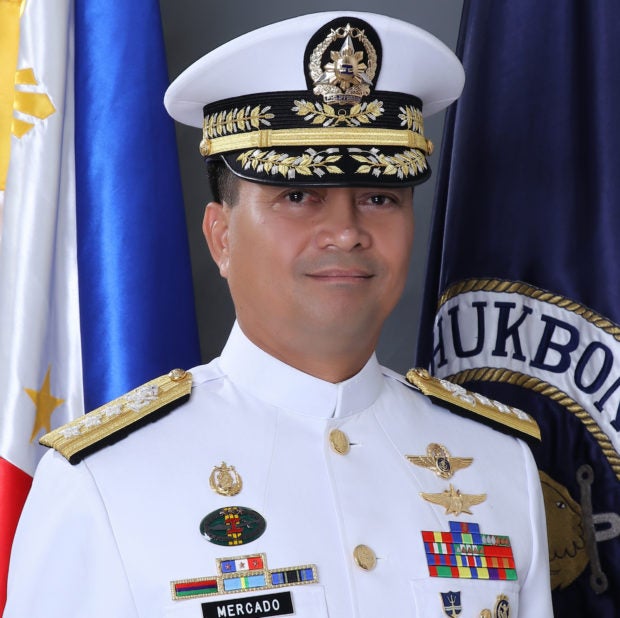 The commander of the Philippine Navy was sacked on Dec. 18 in a move so abrupt that even the chief of staff of the Armed Forces of the Philippines, Gen. Rey Leonardo Guerrero, was surprised.

When word of it came, Guerrero assured the Navy chief, Vice Adm. Ronald Joseph Mercado, that there was “no directive” to fire him.

But less than an hour later, Guerrero texted Mercado to tell him that indeed he had been fired.

Before that, word had been going around that Mercado would be sacked because of a dispute with officials at the Department of National Defense (DND) over the Navy’s P15.5-billion contract for warships.

Still, the transfer of command to Rear Adm. Robert Empedrad, who was sworn in on Dec. 19, came so abruptly it sent shock waves through the entire military.

A ranking Navy official, requesting anonymity, said the incident sent a “chilling message” to the military that anyone, even a flag officer in command (FOIC), can be relieved unceremoniously.

Mercado had supported the Navy project management team’s stand on various issues that came up against Hyundai Heavy Industries, the South Korean company that was awarded the warships contract.

A number of officers and other service members believed Mercado, in holding the line on the warship contract, was just protecting the Navy’s interest.

The DND, however, believed otherwise.

Mercado learned about his dismissal while presiding over the year-end command conference of the Navy and the Marines at the Philippine Navy Officers’ Club in Taguig City on Dec. 18.

Defense Secretary Delfin Lorenzana and Guerrero were with President Duterte at the time touring storm damage in Biliran province.

Sometime between 4 p.m. and 5 p.m., word that Mercado had been sacked came by phone, with an aide relaying it to the Navy chief at the conference.

Verbal directives are not uncommon in the military, especially if the decision had been previously discussed, but the written orders follow.

Mercado texted Guerrero about the phoned-in directive. The military chief replied in the negative, only to text an hour later to confirm to Mercado that he had been sacked.

What happened between the denials and the confirmation is hazy.

On Dec. 24, Lorenzana confirmed to the Inquirer that Mercado’s relief was decided on the night of Dec. 18—a puzzle, because Mercado learned that he had been sacked between 4 p.m. and 5 p.m. that day.

“So while we were in Biliran, I directed General Guerrero to implement his relief the following day,” Lorenzana said.

The defense chief did not deny that Guerrero had earlier told Mercado that talk of his relief was not true, that there was no directive.

“Because that was the only time we received the guidance,” Lorenzana said.

He did not reply when the Inquirer asked if the “guidance” came from President Duterte.

In a news conference on Dec. 20, Lorenzana, his voice certain, said the decision to fire Mercado was his.

It was known, however, that he did not sign a four-page letter to the President recommending Mercado’s dismissal.

The unsigned letter was leaked to the press in early December.

In that letter, Lorenzana accused Mercado of delaying the warship program with insistence on tapping Tacticos Thales to install the combat management system on two frigates that the Navy was acquiring from Hyundai.

But the Navy’s contract with Hyundai stipulates options between Hanwha Thales of South Korea, a subcontractor of Hyundai, and Tacticos Thales of the Netherlands to provide the combat management system for the warships.

Lorenzana’s words at the news conference were exactly the contents of his unsigned letter to Mr. Duterte.

He did not deny the leaked letter, which pictured Mercado as an insubordinate and uncooperative official whose whims had delayed one of the biggest, if not the biggest, projects in the military’s modernization program.

An Inquirer source said one reason why Mercado wanted to go with Tacticos Thales was the dissolution of the Hanwha Thales consortium in July 2016, way before the contract was signed with Hyundai.

Hyundai, however, wanted to use Hanwha Systems, the subcontractor that had replaced Hanwha Thales, for the job.

The source said that Lorenzana and Mercado met on Dec. 3 and the Navy chief assured the defense secretary that he was not delaying the warship program.

Lorenzana, the source said, told Mercado that he did not sign the letter to Mr. Duterte.

In that letter, Lorenzana said he formed a steering committee headed by Defense Undersecretary for Finance and Materiel Raymundo Elefante to resolve the issue with the Navy’s project management team.

As head of the steering committee, Elefante had the “authority to resolve the technical issues” between the Navy and Hyundai, according to the leaked letter.

And it stated that the committee’s findings and recommendation would be part of the contract between the Navy and Hyundai.

Curiously, the letter also said that Mercado had told  the DND through a letter “to proceed without haste on the execution of the project as per contract agreement,” which meant the former Navy chief had already agreed to what the DND wanted.

Lorenzana dissolved the steering committee in the first week of December.

According to the leaked letter, the DND staff and Empedrad, as the warship program technical adviser, urged Lorenzana in August to direct then AFP Chief of Staff Gen. Eduardo Año to instruct the Navy to follow Hyundai’s technical advice to avoid further delay in the acquisition of the frigates.

On the sidelines of the celebration of Armed Forces of the Philippines Day on Dec. 19, Empedrad told reporters that the warship program was on schedule.